Garam Masala, "The Magic Spice" Garam ("hot") Masala ("mixture") There is no right way or wrong way to make Garam masala. There are as many recipies as there are people in India. You can buy it "ready made" from the spice section in your store or make it yourself by mixing already ground spices, or roast whole seeds and grind your own. Chicken Tikka masala is a great dish to introduce one to the wonderfull spicy dishes of India. To serve I put over a bed of rice and garnished with rough chopped cilantro and sliced almonds.

For The Garam Masala:

Put all the Garam Masala ingredients, except the nutmeg and cinnamon, on a cookie sheet and place in the oven to roast. When you start to smell all the wonderful aromas of the spices, remove and let cool.

After the spices have cooled you need to grind them to a medium to fine grind. I do this with a coffee grinder that I use only to grind spices. I have used my motar and pestle for this also. If you use this it's best to add some olive oil and make a paste. After they have been ground, add the cinnamon and nutmeg stiring them in. Put the Garam Masala in an air tight container to store. When you are ready to make your Chicken Tikka Masala, or any other dish requiring Garam Masala you have it ready.

For the Chicken Tikka Masala:

It's best if you marinade your chicken. Put the chicken in a large zip-lock bag, add the yogurt and one and one-half tablespoon of the garam masala. Zip closed, and mix well. Put in your fridg. overnight if possible. If not let it set for at least four hours. After it has set as long as possible, remove and put on a cooling rack that has been set on an aluminum foil lined cookie sheet. (This will help with the clean up later.) salt and pepper to taste, and place in the oven under the broiler. Have the shelve about ten inches from the burner. This will let the chicken cook before it gets too brown. When the up side of the chicken browns, turn it over and let the other side brown. After both sides have browned and the chicken has reached an internal temperature of 170?, remove from oven and set aside

After you have put the chicken under the broiler, You can start with the chopping, mincing, and the dicing.

Chop the onion and put in a pan with two tablespoons butter. Cook the onion over medium high heat untill the onion starts to brown. Add the minced garlic and ginger and turn the burner to medium low. Now add the jalapeno pepper and three tablespoons of the garam masala. Stir all this in and add the can of diced tomatoes. Let this simmer for a while to get everything blended together. Taste and add salt and pepper as necessary. When satisfied with the salt and pepper, pour in one cup heavy cream and add the four tablespoons of the remaining butter. Let this simmer while you cut the chicken breast into one-half inch cubes. Add the chicken, stir into the sauce and let simmer a couple of minutes and serve over rice.

The picture of the Chicken Masala is shown served over a rice dish that has one tablespoon turmeric and one tablespoon garam masala added to the water the same time as I poured in the rice. As soon as the rice was done I added one cup frozen green peas. The hot rice cooked them. 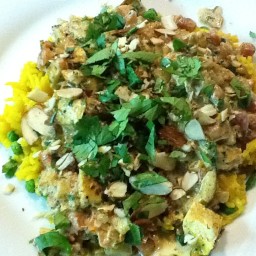 Scrompi
Yummy! This was so good, so flavorful, and so spicy! Definitely a new family favorite. Only issue was that the instructions need to be shortened and numbered. Out was write difficult to read them, but other than that, the recipe was fantastic!
8y
Reply
Reply

christy_Brian
soooooo delicious. the only thing we did different was add the cilantro after the butter and cream were added. our kids ages 6 and 4 ate it up like crazy. exceptionally good with naan and a side of peas and white rice.
8y
Reply
Reply

paigehuff
Excellent recipe! A little involved, but absolutely delicious. I was so glad I had leftovers to eat the next day.
8y
Reply
Reply