This is the real (and real good) Chile Rellenos!

Lightly fry peppers in oil until they blister all the way around. Remove from oil and place in a grocery plastic bag and let rest until cool. When cool, using paper towels or plastic gloves, remove skin from peppers (a very important step to overall dish).

Make incision from stem half way down pepper. Clean out seeds if desired. It is not critical for all seeds to be removed. Set peppers aside.

Finely dice (needs to be very small) the potato and carrot. Place in boiling water and cook until tender. Remove from water and set aside.

Fry ground beef, Worcestershire, salt, pepper, and fajita seasoning (if desired) until done and crumbled; remove from heat. Add potatoes and carrots to mixture; set aside.

Stuff peppers with beef mixture to full. Optionally, you can tie a thread around the pepper to hold it together.

Hint: If you like milder flavor and/or don't like messing with the stem and pod at the top of the pepper, gently slice around the stem (before stuffing) to remove stem and pod. Stuff pepper and insert a Ritz Cracker into the top to hold shape and seal stuffing.

After stuffing, lightly dust peppers with flour which will help the egg batter stick to it.

Dip peppers into egg mixture (which will be light and fluffy) and place in heated oil.

As it cooks on one side, slowly baste the top with oil to help solidify egg batter crust.

Turn peppers; cook til golden brown on all sides.

Extra Hints: For the stuffing, you can use whatever you like (e.g. onion, rice, cheese, etc.). 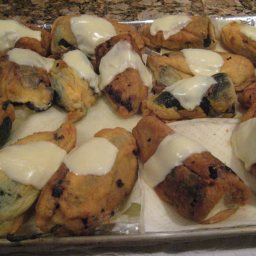 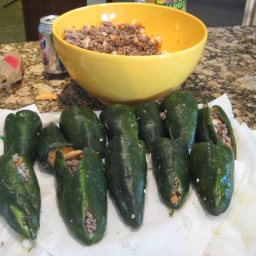 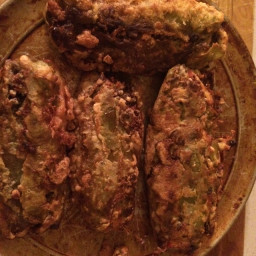 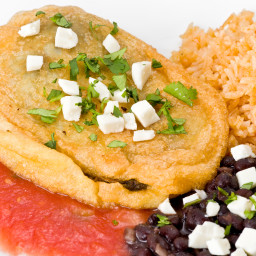 bobochess
This was a slightly hard recipe. I did substitute Waxed Poblano Chiles because I couldn't find the other at the store I was at. I'm surprised that they turned out as well as they did. Chilling the peppers after stuffing for a while made them just a little easier to handle. Too much meat for just 4 peppers, but we are going to save the leftover for another dish.
5y
Reply
Reply

elvins
This is a tough recipe because of the peeling of the peppers. If you overcook them they'll be mushy and hard stuff while keeping in one piece. I took off what i could and it helped the batter stay on. Some advice... Use the biggest peppers you can find. You'll need them if you're going to stuff 2 lbs of meat into 4 peppers. I had tons left over.
10y
Reply
Reply

TJCOOKER
Geesh, I can't believe I did that! I changed the recipe to 2 pounds. The last time I made them (before posting this) I made a dozen or so. Sorry for the confusion! You want enough beef to stuff the number of peppers you have - 1/4 to 1/2 pound each.
11y
Reply
Reply

TJCOOKER
Excellent and authentic recipe for a wonderful dish. You won't find it in a restaurant this way or this good! [I posted this recipe.]
11y
Reply
Reply