Whole chile peppers are roasted and stuffed, then cooked in egg batter.

If using fresh peppers, place under broiler, about 4 inches from the heat. Broil just until skins blister. Let cool in a food storage bag or paper bag for a few minutes.

Peel, remove stems and seeds. Cut the peppers or canned chiles in half crosswise.

Stuff each pepper with cheese; roll in flour. Beat egg whites until stiff but not dry. In another bowl, beat flour and salt with egg yolks until thicken and lemon colored. Fold beaten yolk mixture into the egg whites.

In a large skillet heat a little oil over medium heat. For each relleno, Spoon about 1/2 cup of egg batter onto the hot skillet. Spread egg mixture out slightly to make a circle. As egg begins to set, place a filled pepper on top of the mound. Cover with more of the egg mixture. Continue cooking until bottom is browned. Turn carefully and brown the other side. Drain on paper towels. Serve with salsa. 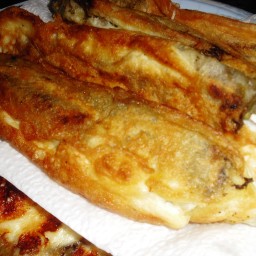 very tastey recipe, just like the restaurant does it, excellent

stevemur
[I made edits to this recipe.]
13y
Reply
Reply