Why this recipe works: Traditional chiles rellenos may be delicious, but preparing them is no small task. First the chiles are roasted, next they�re stuffed with a cheesy beef filling, and finally they�re dipped into batter and fried until they�re golden and crisp�not to mention the step of making a spicy tomato sauce to serve with the peppers. Instead, we captured each of these elements in a casserole with a fraction of the fuss. We combined saut�ed chiles, beef, and piquant Ro-tel tomatoes and finished the dish off with a baked puffed egg white and cheese topping.

1. Adjust oven rack to upper-middle position and heat oven to 450 degrees. Heat oil in 12-inch nonstick skillet over medium heat until shimmering. Add onion and cook until softened, about 5 minutes. Stir in beef, breaking up meat into small pieces, and cook until no longer pink, 8 to 10 minutes. Using slotted spoon, transfer beef mixture to paper towel?lined plate. Pour off all but 2 tablespoons fat from skillet.

2. Add poblanos and cook over medium-high heat until browned, 8 to 10 minutes. Stir in beef mixture, garlic, cumin, ? teaspoon salt, oregano, ? teaspoon pepper, and cayenne and cook until fragrant, about 30 seconds. Add tomatoes and cook until beef mixture is dry, about 1 minute. Off heat, stir in 2 cups Monterey Jack. Scrape mixture into 13 by 9-inch baking dish, pressing into even layer.

4. Pour batter over beef mixture. Bake until topping is light golden and puffed, about 15 minutes. Sprinkle with remaining ? cup cheese and bake until golden brown, about 10 minutes. Let cool on wire rack for 10 minutes. Serve.

If you can�t find Ro-Tel tomatoes, use 1 cup of drained diced tomatoes combined with 1 finely chopped, stemmed, and seeded jalape�o. 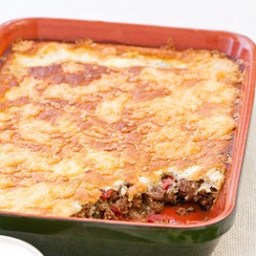