Try this Chinese Potstickers recipe, or contribute your own.

Squeeze all the moisture from the spinach, then combine it with the pork, onions, cilantro, soy sauce, sherry, ginger, sesame oil and garlic; mix well. Lay a potsticker wrapper on a potsticker press. Spoon 2 ts filling into the center of the wrapper. Brush the edges of the wrapper with egg white. Press the two halves of the press together firmly. Gently remove the folded and crimped dumpling; lay the dumplings on a flat surface, crimped edges up, to form a flat bottom. Repeat with remainder of filling and wrappers. Heat 2 tb oil in a 12" heavy skillet over medium-high heat. Add as many potstickers as you can get in the pan without crowding, and cook until golden brown on the bottom. Add 1/2 cup of the broth and cover the pan immediately (as soon as the broth comes in contact with the oil a major amount of splattering and sizzling occurs, so be careful.) Reduce the heat to medium-low, and cook the dumplings until most of the liquid has been absorbed and the potstickers are nicely plumped and a deep golden brown on the bottom. Remove from heat and keep warm in a 200F. oven while you cook the remaining potstickers in the same manner. In a small container, combine the dipping sauce ingredients. Serve the sauces in separate dishes with the potstickers. Source: Medford Mail Tribune, 10 January 1995 Typed by Katherine Smith Kook-Net: The Shadow Zone IV - Stinson Beach, CA 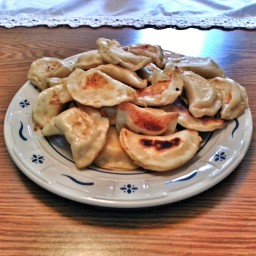