A quick and simple way to turn simple into elegant while having a lot of fun. Try this adventure into "Plate Painting"

This recipe is really more about the presentation technique than the dish. You could use any two contrasting colors of pudding or any other semi-thickened foods to create the effect. The idea is to have a little fun while dressing up the plate.

Have individual serving dishes set out and ready as you will need to work quickly once the puddings are made.

In separate bowls, prepare the two puddings according to package directions. Split 3/4 of the vanilla into 4 dishes and 3/4 of the chocolate into the other 4.

Thin each remaining 1/4 with a tablespoon or so of extra milk. It should be runny but not soupy.

Use a large spoon to pour a dot (about 1/2 inch) of the opposite color pudding in the center of each serving. Then carefully pour a thin circle of pudding around the dot about 3/4 inch outside. Depending on the size of the serving dish you might want to do a second circle. You now have a sort of "bulls eye" pattern on each dish.

Take the handle of a spoon, knife blade, or other implement and pull through the center dot drawing some of the pudding out to the outer circle. Do a cross going horizontally and vertically from the dot.

Now start drawing out from the outer circle at 45 angles to the lines from the dot. Add as many as you like but try to be consistant in the spacing. The best way to do this is by making lines on opposite sides alternately.

As you "paint you''ll find you can vary the width of the line by changing the speed and angle of the "brush". Faster give thinner lines. Try adding a small, quick swirl at the end of the stroke or turning the "brush" sideways to create a feathery effect.

If you have a total failure or decide something is "beyond fixing", grab a spoon and eat the "evidence". No one will every know.

Place mint leaves or other garnish on the completed creation, cover with some plastic wrap and pop it in the refrigerator to hold until dessert time.

Nothing says this has to be a dessert thing. Try spreading out mashed potatoes and "painting" a squiggle of cheese sauce in a "Lightening Bolt" pattern pointing to a small dot of paprika or other spicy tidbit.

My kids grew up on this type of "culinary experimentation". Some times they still refer to "Dad's Food Art". 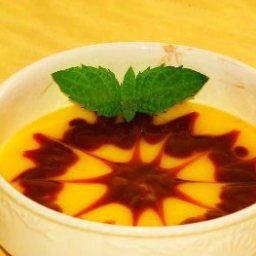 jfitch
What a creative suggestion. It sure does make "plain pudding" look fancy. I'll have to keep it in mind for myself.
14y
Reply
Reply

mcrismon
My kids grew up on this type of "culinary experimentation". Some times they still refer to "Dad's Food Art".
14y
Reply
Reply

promfh
My kids grew up on this type of "culinary experimentation". Some times they still refer to "Dad's Food Art". [I posted this recipe.]
15y
Reply
Reply