Delicious, fluffy, chocolate waffles that can be a dessert as much as a breakfast!

In a large mixing bowl, whisk together the yolks and milk. Add the flour, baking powder, cocoa powder, and butter then mix until smooth. In another mixing bowl, whip the egg whites on high speed until they have stiff peaks, adding the sugar half-way through when soft peaks have formed. Using a spatula, fold the whipped egg whites into the batter.

Putting it all together

Heat a waffle iron and cook the batter until done. Break the waffles into sections, and drizzle with plain yogurt and ganache. Top with coconut flakes and crushed pecans for an extra fancy flair. 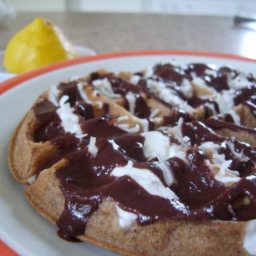 Breakfast is served - but it won't last long!

Winkyboy
Using plain yogurt (as opposed to sweetened) will complement the flavor of the ganache. The waffle batter can be made a day in advance, covered and stored at room temperature. The ganache can be made up to 3 days in advance when stored in the refrigerator. [I posted this recipe.]
12y
Reply
Reply