Serve as an appetizer with crackers, matzo, on rye, or gluten free crackers. Store in a tightly covered container in the refrigerator for 6-7 days. Chopped liver can also be frozen and served at a later date.

Prepare schmaltz and gribenes ahead of time, or purchase schmaltz from your local kosher market. Goose fat or duck fat can be used in place of schmaltz if desired. Prepare the livers by cutting off any tough pieces or stringy tendons. You should also cut away any pieces of liver that look discolored, yellow or strange. This is pretty much the worst prep job ever, as uncooked liver has a soft and slimy texture, so make sure this step is done by someone with a strong stomach. Add 2 tbsp schmaltz or oil into a large cast iron or nonstick skillet and melt over medium heat. Put half of the chicken livers into the skillet and fry them for 3 minutes on each side (about 6 minutes total). Season the livers generously with salt and pepper as they are cooking. *Note: If you plan to kosher your chicken livers by broiling them prior to making chopped liver, you will only need to sauté them in the skillet for about 1 minute on each side. Koshering the livers cooks them, so there is no need to sauté them for a long period of time. Be careful not to overcook or burn the livers, or they will become dry. After cooking, livers should be firm and browned on the outside while slightly pink on the inside. They will continue to cook internally after you remove them from the skillet; don’t overcook them, or they will turn dry. When the livers are brown and firm, pour them into a medium-size mixing bowl along with the leftover schmaltz/oil from the pan. Add another 2 tbsp of schmaltz/oil to the skillet, melt it, and fry the remaining livers repeating the same process as above. Add the livers and leftover schmaltz/oil from the pan to the mixing bowl. The skillet should now be seasoned with schmaltz or oil, so you don't need to grease the pan again. Add the onion slices to the skillet.Cover the skillet and let the onion cook undisturbed over medium heat for 10 minutes. This kick-starts the caramelization process. Uncover the skillet, stir the onions, and continue to sauté them for another 30-40 minutes, adjusting heat as needed to keep the onions from burning. Ideally the onions should be deeply caramelized, tender and sweet - this is what gives Jewish chopped liver its trademark savory-sweetness.Don't try to speed up the caramelization process, it takes time-- and that's ok. Good things are worth waiting for. When the onions have reduced to about 1/3 of their original size and are soft, sweet, and golden, they're ready.  Add the cooked onions to the mixing bowl along with 4 of the diced hard boiled eggs and the ½ cup of gribenes (optional). Season all ingredients generously with salt and pepper.  Now it's time to chop all of the ingredients together into a blended mix. There are various schools of thought on the "right" way to chop liver. The old fashioned way is to chop it by hand with a knife, mincing and mincing until it resembles a rough pâté.  Another popular method is using a meat grinder. I use a meat grinding attachment on my Kitchen Aid mixer on the fine hole setting. Works like a charm.If you want to take a more modern approach, fit your food processor with a metal blade. Place all ingredients into the processor and pulse for about 30 seconds, stirring once halfway through processing, until a roughly textured paste forms.  Whatever method you choose, it's important to taste the chopped liver once it is ground. Add salt or pepper to taste, if desired. Be a bit generous with the seasoning, as the liver is best served chilled and the seasoning won't taste as strong after chilling. Chill the chopped liver in the refrigerator until ready to serve. Garnish with remaining diced hardboiled egg and minced parsley. 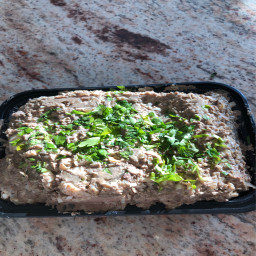