If you decide to skip past the Cheese Coney and just order a plate of Chili in Cincinnati be prepared with an answer to the question "2-way, 3-way, 4-way, or 5-way?"

2-way: Spaghetti topped with chili and oyster crackers on the side (never saltines).

3-way: A 2-way topped with a heaping mound of shredded cheese.

"Have ya ever burped, and tasted a hot dog you ate two days ago?" George Carlin

In 1922 Tom Kiradjieff and his brother John, Macedonian immigrants, opened the Empress, a restaurant where they sold Greek food and hot dogs.

But, legend says, Cincinnati was German and business was bad. So he took his signature Greek lamb stew laced with cinnamon and cloves, switched to ground beef, added hot peppers and other spices, called it chili, and served it over spaghetti and hot dogs. Although it bore little resemblance to the classic Texas chili or Italian spaghetti sauce, it was a hit. Today it is estimated that there are about 200 chili parlors in the Cincinnati area.

In 1949 Nicholas Lambrinides, a Greek immigrant and a former employee of the Empress opened Skyline Chili. It is by far the most popular with more than 100 locations. They even sell their chili in cans online. Gold Star Chili is another popular chain with canned chili online. Camp Washington Chili is perhaps the most revered chili parlor. The single location is a Cincinnati landmark, and their chili has won a James Beard Foundation Award as an "American Regional Classic".

Nobody knows if naming hot dogs "Coneys" was homage to the amusement park on Long Island in New York where hot dogs are the food of choice, or if the name came from the other Coney Island amusement park, the one built in Cincinnati in 1886. And nobody knows for sure who had the bright idea of topping Coneys with a huge mound of shredded cheddar cheese, but that's how they make the Cincinnati Cheese Coney that is served all over town and at the ballparks: A pork and beef frank with a natural casing topped with mustard, then chili, then chopped onions, and an ungodly amount of shredded cheese

2) Normally, at this stage we would brown the meat, but in The Queen City the meat is not browned, it is simmered. In a 2 quart sauce pan melt the lard over medium heat. Add the onions and cook until limp, then add the garlic for 1 minute. Add the spices for 1 minute to release the oil soluble flavors and mix in. Be careful they do not burn.

3) Add the wet ingredients and mix thoroughly. Bring to a boil and then knock it back to a simmer. Crumble the meat into the liquid leaving it wormy looking. Simmer on low for about an hour with the lid on. Remove the lid and discard the bay leaf. Cook it down until it is wet, but not runny, perhaps another 20 minutes. Taste and adjust the flavorings to your preference.

4) Cook the franks on the grill. Steam the bun. Place the franks in the buns, top with mustard, chili sauce and onions. Pile the cheddar on high. Don't try to melt it. Serve it right from the shredder 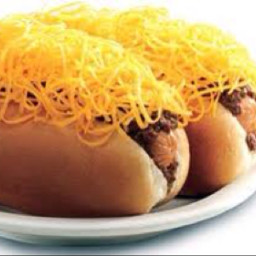 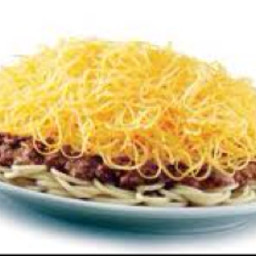 Domino4422
My family loves this recipe! I added ketchup and it gave it more flavor! The chilli is the bet part and we use it in our cheese burgers and just eat it on its own with some sour cream! Thanks for the recipe!
9y
Reply
Reply

Jedewards
It's not an exact recipe for the chiles served at Gold Star chili or Skyline Chili, but it's very close and very good.
9y
Reply
Reply