"Churritos" are a simple crowd pleaser that might be described as the Spanish equivalent of doughnuts. Even though most people reading this have turned to a low carb diet to lose some weight and get their sugar cravings under control, they can still enjoy this dessert. These Cinnamon Churritos are welcome treats that will fit perfectly into your low carb lifestyle, and the easy-to-make Churritos are excellent options to satisfy your need for dessert while keeping you in shape.

Churritos can be served for breakfast with a good cup of coffee on the side. Perhaps this combination sounds sinful to people who have strong feelings about losing weight, but you don't need to worry about your weight loss program or diet plans because a bite of these yummy churritos is not going to ruin your diet. If you are a fan of churros, enjoy these easy-peasy low-carb churritos in only 20 minutes!

Chef's Tips: If you cannot finish them in a day, you may also put them in the freezer for 3 months or refrigerate for up to 1 week.

In a large skillet or deep fat fryer, add 2 to 3 inches of oil, and heat to 350°F. In a small bowl, stir ½ cup almond flour, 2 tablespoons coconut flour, 1/4 teaspoon baking powder, 1 teaspoon cinnamon and 1/8 teaspoon salt until well mixed and set aside.

Bring 1/2 cup unsweetened coconut milk, 1 tablespoon unsalted butter, and 1 tablespoon granular sugar substitute to a boil in a small sauce pan. Remove the pan from the heat and add in flour mixture stirring until thick enough to form a ball. Cool for 5 minutes.

Add 1 large egg after the dough is cool and mix thoroughly for about 1 minute until a very thick paste forms. Drop by tablespoons 4-8 at a time into the fryer, rotating halfway through, until they turn golden brown and crisp on the outside; roughly 3-4 minutes total. Repeat this until all of batter is used, and then set aside on a paper towel once done.

Roll each warm churrito in the sugar substitute-cinnamon mixture until evenly coated and place them on a serving plate. Enjoy these delicious Cinnamon Churritos immediately. 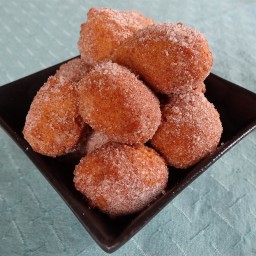