These cinnamon rolls are delicious and easy to make. They are perfect for autumn weekend mornings. You can make them up to a day ahead and pop them in the oven the morning that you are ready to eat them. These sweet, apple-flavored cinnamon rolls are a family favorite around the holidays as well.

Heat milk to 120 degrees and add the yeast, stirring until dissolved.

Use a large bowl to whisk together bread flour, salt and sugar.

Add the milk to the flour mixture and blend lightly with a fork. Cover and let stand for 10 minutes to further activate the yeast.

Add eggs and butter to the flour mixture and blend until smooth. Add additional flour a 1/2 cup at a time until a smooth dough is formed. Dough should only be lightly sticky when kneaded.

Knead for 6 minutes and then add the dough ball to a greased bowl, turning over so that all sides of the dough are greased. Cover with a towel and leave to rise in a warm place for 1 hour.

While the dough is rising prepare the filling.

Grate two peeled apples to make one cup of grated apple. Spread the grated apple on a plate and press well with paper towels until mostly dry. Put aside.

In a mixing bowl or electric mixer combine the brown sugar, cinnamon, flour. Slowly add cubes of the butter until a coarse paste is formed.

Once an hour has elapsed punch down the dough and turn onto a lightly floured surface, allow to rest for ten minutes.

Roll the dough into a 12 inch square.

Spread the filling paste on top of the dough up to within 1/2 inch of the edge (do not spread to the edge or you will not be able to seal the roll edges).

Sprinkle the shredded apple on top of the cinnamon paste.

Roll the dough up into a tube shape and pinch along the edge to seal the long side.

When ready to bake, remove rolls from fridge and let stand at room temp for 30 min. Bake at 350 for 30 minutes or until golden brown.

Combine the glaze ingredients and drizzle over warm rolls before serving. 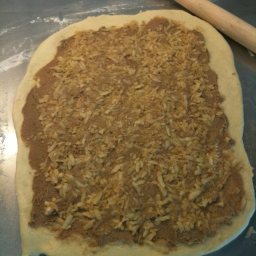 Dough rolled out and spread with cinnamon paste and apple. 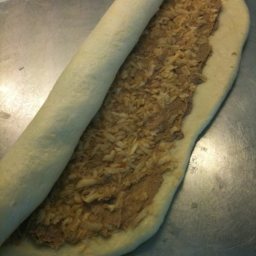 Rolling the dough to make the tube shape. 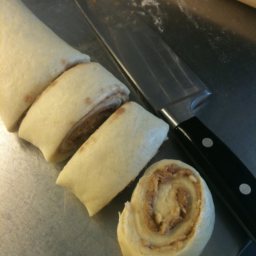 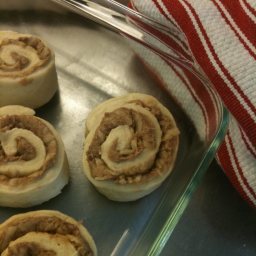 Place rolls in a greased baking dish about an inch apart. 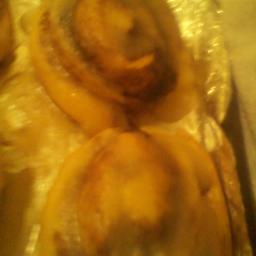 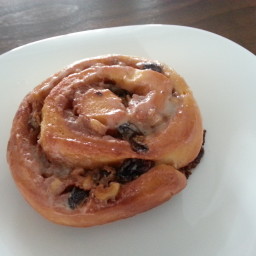 HungryKitten
This recipe can be expanded by adding grated orange zest to the cinnamon filling and adding a tsp of orange juice to the drizzle. Chopped pecans are also a great addition to the filling. Serving these with a ramekin of warm fruit compote or a bowl of vanilla yogurt makes for a nice breakfast. [I posted this recipe.]
12y
Reply
Reply