This is the best apple pie you will every chow down on, it uses sweet vinegar and cinnamon to create a unique taste you won't be able to find anywhere else. Found and altered from http://www.myhomecooking.net/apple-pie/apple-pie-crust.htm.

Warm the butter in the microwave until it is soft, but not melted.

Mix in a large bowl:

Then cut in using the dough blender:

Wrap your pie crust in plastic wrap. Then place in refrigerator for 20 or more minutes, while you make the pie filling.

Peel and slice your apples.

Soak them in water with a tablespoon of lemon juice. This will prevent the first apple cut from.

Now, drain the water off of the apples and mix them with the spices.

Now that you have finished the filling, it is time to assemble your pie.

Now that your pie crust has had plenty of time to cool, divide it into two, equal halves.

Roll one of the balls of pie crust out until it is around 1/8th of an inch thick.

Once you have rolled out the dough, wrap it around the rolling pin and unroll it onto your pie pan.

Once you have shaped it to fit the inside of the pan, take a fork and poke holes in the bottom of the crust. This will let the steam out as the pie bakes.

Dump all of the apples in the pie. Place about 4 chunks of butter and four spoons of brown sugar on top of apple filling. This will give the filling rich flavor.

Roll out the remaining pie dough and place it on top.

Create a pattern around the edge of the pie by using the back of a knife.

hint: Poking holes in the top of a pie usually keeps it from overflowing, but I find that this pie does better without them

Cut long strips of tinfoil and place them around the edge of the pie.

This will prevent the crust's edge from burning while it bakes. You will want to take the tinfoil off about ten minutes before the pie is done. This way, the apple pie will have a golden brown edge.

For a glossy effect, brush a small portion of egg white on top of the crust when you remove the tinfoil. Sprinkle a small amount of Cinnamon Sugar over the top of the egg white for a sweet, sugary kick to your pie. 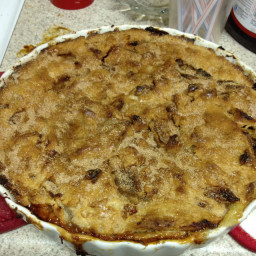 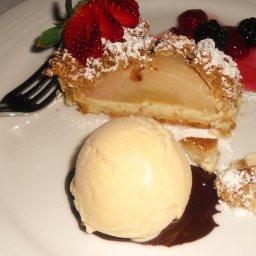 this is really good served with ice cream, this is not my recipe but it is my photo, CCheryl

chika_reyes
DELICIOUS!!!! I didn't exactly have all the right materials (blender of any kind, rolling pin or peeler) but I managed to pull it off. Tasted like something from a restaurant! A must to repeat soon!!
10y
Reply
Reply