Try this Cinnamon Sugar Scones recipe, or contribute your own.

In a large bowl, combine the flour, 3 tablespoons of the sugar, baking powder, and salt. Pinch the butter into the dry mixture with your fingers or cut it in (with a pastry blender; I use this one) until it resembles coarse cornmeal. Make a well (clear area) in the center and pour in the half-and-half, then the egg. Use a fork to gently combine the egg and cream in the center, then use it to combine everything into a rough mass. Dip your hands into the bowl and knead the mixture a few times into an even mass.

On a lightly floured counter, roll the dough to roughly a 10-by-6-inch rectangle (think: a piece of paper but a little smaller). Sprinkle 1 tablespoon of the remaining sugar and 1 teaspoon of the cinnamon over half of the rectangle (it will seem like too much but trust me, these scones do not end up overly sweet), then fold it in half. Roll the dough out again into an 8-by-6-inch rectangle; sprinkle another of the remaining tablespoons of sugar and the last teaspoon of cinnamon over half, then fold in half again. Do not roll again, just pat the dough into roughly a 6-inch circle and cut with a sharp knife into 6 wedges. Evenly space the wedges on the pan, sprinkle with final tablespoon of sugar, and bake until slightly golden at the edges, 15 to 17 minutes.

Do ahead: Really, scones are better the first day, freshly baked. You can rewarm them in the oven briefly on the second, but it’s always a bit more dry. You could make them and freeze them until needed instead. You’ll probably need 4 to 5 extra minutes in the oven if baking them from frozen. 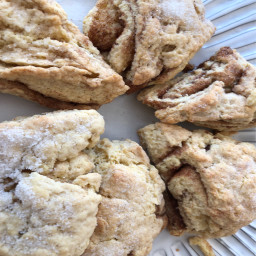