Cocoa Cinnamon Brownies with Walnuts. I really don't need to say anything more.

Preheat your oven to 160 degrees Celsius. Line the bottom and sides of an 8x8-inch square baking pan with parchment paper or foil, leaving an overhang on two opposite sides. Combine the butter, sugar, cocoa and salt in a medium heatproof bowl and set the bowl in a wide skillet of barely simmering water. Stir from time to time until the butter is melted and the mixture is smooth and hot enough that you want to remove your finger fairly quickly after dipping it in to test. Remove the bowl from the skillet and set aside briefly until the mixture is only warm, not hot. I actually skipped this step and microwaved it all, stirred vigorously, then combined the cinnamon. I was stuck on time and it worked perfectly. I've tried the original method before, which produced almost the same result with a 10-15% smoother brownie at the end. I highly recommend the proper way if you have the time.

Stir in the vanilla with a wooden spoon. Add the eggs one at a time, stirring vigorously after each one. When the batter looks thick, shiny, and well blended, add the flour and stir until you cannot see it any longer then beat for 40 strokes. Stir in the nuts. Spread evenly in your lined pan.

Make sure the butter is properly melted. 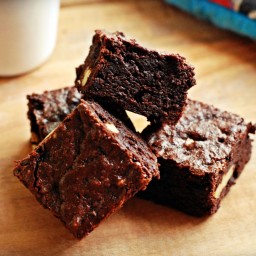