At least 24 hours before you plan to churn the ice cream, put the ice cream machine's bowl in the freezer to freeze. It should be frozen solid before using (you should hear no liquid sloshing inside when you shake it).

Heat the ice cream base until thickened: This is your ice cream base. Increase the heat to medium. Stirring occasionally, continue cooking the base until it has thickened enough to coat the back of a spoon, 6 to 8 minutes. Do not allow the base come to a boil.

Chill the base: Pour the base into a shallow container. Let the base cool slightly on the counter so it's not hot when you put it in the fridge. Before refrigerating, press a piece of plastic wrap against the surface — this coconut milk base doesn't form a skin quite as badly as a milk-and-egg base, but it doesn't hurt! Cover the container and refrigerate for at least 4 hours or for up to 3 days.

Begin churning the ice cream: Remove the base from the fridge. It should be completely chilled and slightly pudding-like in texture. Pour the base into your ice cream machine and begin churning.

Warm slightly before serving: If your ice cream is too hard to scoop, let it warm a few minutes on the counter before scooping. I find that coconut ice cream melts a little more quickly than milk-based ice creams, so don't wait too long! 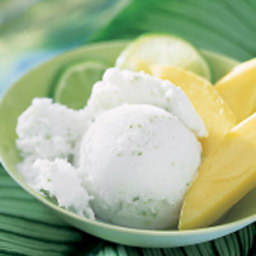