Try this Cold Zucchini Soup with Curry recipe, or contribute your own.

Rinse the zucchini and pat dry. Trim off the ends and cut about a cupful of zucchini into thin match sticks. Place in a saucepan, cover with cold water and boil 3 to 4 minutes. Drain and set aside. Meanwhile cut the remaining zucchini into small chunks and put in a kettle. Add the onion, peeled and thinly sliced. Sprinkle with curry powder and stir to coat the pieces. Add the chicken broth and bring to a boil, cover, and simmer about 15 minutes or until zucchini is very tender. Whirl in a blender or food processor or put through a food mill. There should be about 4 cups. Add the cream, milk, salt and pepper to taste. Add the reserved zucchini stickls. Chill thoroughly. Serve sprinkled with chopped chives. Serves 6 to 8. (Recipe is from HICKORY HILL ZUCCHINIS by Barbara Cooley McNamee.) Posted to KitMailbox Digest by "Joanne L. Schweikj" 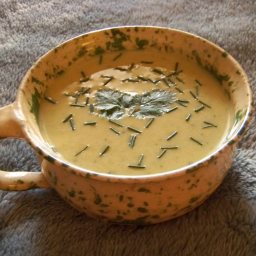 Querian
I enjoyed this but only are it hot. I had it wish fish and I think if I had made some crusty garlic bread to dunk in the soup it would have been perfect.
7y
Reply
Reply

wyattj
I used a calorie reduced cream. We used fresh chives and it was very successful
8y
Reply
Reply

mimito5
Yes, I would make it again, and have made it twice since coming upon the recipe! My husband, son and daughter-in-law loved it! Now I have to admit, I did not follow the recipe right to the "T". I cut up the zucchini into chunks, along with diced onions and then stirred in the curry powder until all pieces were well coated. I then added the chicken broth (I added two full cans of broth, which is a little more than what the recipe calls for, but felt I had enough zucchini to warrant this alteration.) Then I misread the recipe, and went ahead and put evaporated milk in with the broth BEFORE cooking....it did not hurt the recipe at all, in fact I think it made it thicker. However, I have a gas stove and was able to closely monitor the heat. If you have an electric stove, you will need to go right by the directions OR watch it very closely so as not to burn the milk. The first time I made it, I very carefully trimmed out "matchstick" pieces to put into the soup----but nobody used them!. They loved the soup just the way it was, without the little stick pieces of zucchini! We made garlic bread to accompany the dish, and added salt, pepper and fresh chives from the garden to each individual bowl as desired. I hope you will try this with your fresh zucchini, I think you will be very pleasantly surprised! K. Flint, NC
9y
Reply
Reply