The easiest way to describe coquito [pronounced "koh-kee-toh"] to those who aren't familiar with it, is to call it a "Puerto Rican eggnog." But to be honest, I don't care for eggnog, so even just writing that makes me want to run and hug my bottle of coquito and say "There, there now. I didn't mean it. You're so much better than that."

Growing up, my mom would always whip up a few bottles of coquito just before Christmas. My dad would usually commission a couple of them to bring into work to share with the team as a Christmas gift, but we'd keep one for sipping on throughout the holiday season.

Combine evaporated milk, condensed milk, and coconut cream in a large blender and blend until well combined. Add the rum, vanilla, and ground cinnamon, and blend in.  (If your blender is small, do this in batches and pour into a large bowl as you go.)

Pour into a pitcher or glass bottles with sealed lids and drop in the cinnamon sticks and vanilla bean halves. Cover and chill in refrigerator for at least 2 hours or until very cold.

Serve straight in small glasses garnished or on the rocks in larger ones. Garnish with a sprinkle of cinnamon and a cinnamon stick. Leftovers will keep tightly sealed in the refrigerator for about one week (shake the jar vigorously each time before serving).

***Want to make it a little bit less strong? To cut the rum, replace the desired amount of rum with equal parts ice cold coconut or whole milk. 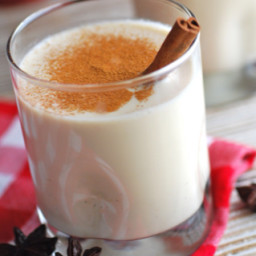 judy.almontea7o6
Thanks for this recipe!! I love this but never knew how to make it. It tastes amazing!!! A keeper!!
4y
Reply
Reply