Spread the cornbread crumbs on a sheet pan and let toast for about 20 minutes, or until lightly toasted and dry. Turn oven up to 350 degrees F.

In a skillet brown the bacon until crispy. Drain. To the same skillet add the red pepper, jalapeno, and garlic and cook until soft.

In a bowl, combine the cornbread crumbs, bacon, and vegetable mixture. Add parsley and salt and pepper, to taste. Add the egg and mix thoroughly.

For the meatloaf: In medium skillet over medium heat add oil, red onions, jalapeno and garlic. Cook until caramelized, remove from heat and let cool.

Divide the meat mixture in half. Shape 1 half into a rectangle, creating a canoe, and then loosely fill with stuffing. Do not pack it in. Use the other half of the meat to fully enclose the stuffing. Transfer to the oven and bake for 1 1/2 hours, or until internal temperature reaches 145 degrees F. Layer the cheese slices on top and bake for another 5 minutes to melt the cheese. Remove from oven and let rest for about 10 minutes. Cut into thick slices and serve. 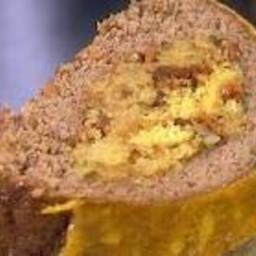