Open the biscuit dough and separate the 8 biscuits. The carefully split each biscuit in half so you wind up with 16 disks of dough. Flakey biscuits are made with layers and will split easily between the layers. Gently flatten each disk to increase it's diameter then place it in a sprayed muffin tin. Push it down and gently press the sides up to form a cup of dough. Allow the dough to rest in the cups while you make the filling.

Place the oil in a medium skillet and put it over medium heat. Break up the canned corned beef and fry it lightly until some of the grease releases. Add the onions and garlic and continue cooking until the onions start to soften. Mix in the shredded potatoes and season with black pepper. There's a fair amount of salt in the corned beef so you probably won't need to add any salt unless you desire more. Fry the mixture until it in browned on the bottim then turn over in the skillet and brown the top half as well.

When the hash is browned, spoon it into the biscuit cups. Fill each one fairly full so there's a bit of a mound of hash in each one.

Bake at 400F for 7 - 12 minutes (see biscuit dough instructions). They are done when the biscuits are golden brown and the top of the hash is slightly crisp.

Allow to cool just a bit and garnish with a small dollop of ketchup before serving.

These keep nicely in the freezer. Just reheat in the microwave and garnish with ketchup (or BBQ sauce) before serving. 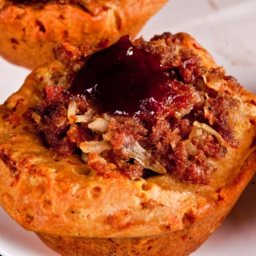 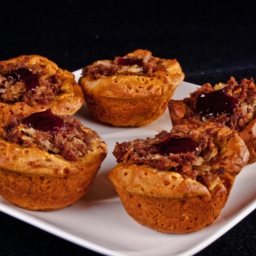 promfh
Be careful not to over bake these. You want golden brown and flakey, not dark brown and chewy on the biscuits. It's a matter of about 5 minutes baking time from one to the other.
12y
Reply
Reply

promfh
These keep nicely in the freezer. Just re-ehat int eh microwave and garnish with ketchup (or BBQ sauce) before serving. [I posted this recipe.]
12y
Reply
Reply