Try this Cosmopolitan Cupcakes recipe, or contribute your own.

Sift the flour, baking powder and salt into a bowl.

Place eggs and sugar in a bowl and beat with an electric mixer for two minutes until light and foamy. Pour the melted butter over the egg and sugar mixture while beating on low. Once incorporated, add the triple sec.

Add half the flour mixture into the wet batter. Add the milk and orange juice and incorporate.

Add the other half of the flour mixture and mix until just combined.

Divide the batter among the twelve liners and sprinkle chopped cherries into it. Bake for 25 minutes or until a toothpick comes out clean. Allow to cool before frosting.

Place one cup of the icing sugar in a bowl with the sugar, salt and butter. Cream with an electric mixer on high until light and fluffy.

Turn mixer to high and beat until fluffy.

Pipe your cupcakes, sprinkle with edible red glitter and top with a maraschino cherry. 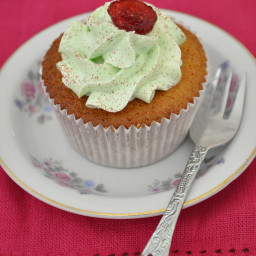 CayleeGrey
The amount per ingredient is listed there...
10y
Reply
Reply

X33mandi
How much for each ingredient?
11y
Reply
Reply

CayleeGrey
A cocktail in a cupcake. Yum.
11y
Reply
Reply