Try this Cotton Candy Cupcakes recipe, or contribute your own.

Add the dry ingredients together in the bowl of a stand mixer and combine on a slow speed until well blended.

Add the softened butter, one half stick at a time, allowing the butter to combine before adding the next. With the mixer set at slow, add one egg white at a time, followed by the whole egg, scraping down the sides and ensuring each egg white is completely incorporated before the next addition.

Fill your cupcake liners until they are ? full. Preheat your oven to 350ºF. Bake for 16 – 18 minutes, or until a toothpick just comes out clean, so as not to overbake. Set aside to cool.

In a standing mixer, whisk together the sugar and softened butter on low speed. Once it becomes well blended, increase the speed to medium until the mixture becomes fluffy. Add vanilla, cotton candy flavoring, food coloring, and cream, and beat on medium until well incorporated – about 1 to 2 minutes. Garnish with pre-made cotton candy if so desired. 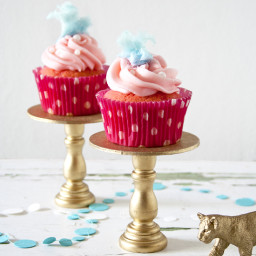