Heat the oil in a heavy 9 inch cast iron skillet, to 360 degrees F.

Season the steak with salt and pepper

Combine the egg with 3 tablespoons of the milk. Put 1 1/2 cups of the flour in a shallow pan and season with salt and pepper.

Dredge the steaks in the flour, coating each piece evenly and tapping off any excess.

Dredge again in the flour, shaking off any excess.

Fry the steaks in the hot oil, until golden brown on each side, about 3 minutes. Remove and drain on paper towels.

Season with salt and pepper.

Brown ground beef in skillet. Stir in flour, then remaining ingredients. Bring to boil, then simmer until thick. Pour over steaks. 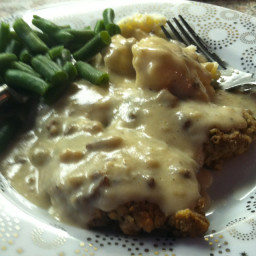 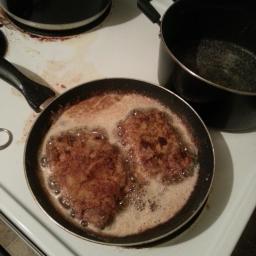 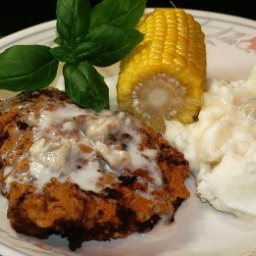 Hoffy79
I agree with the other reviews about the thickness of the gravy, just gradually add your broth and milk slowly until its at a consistency that you like. The meat turned out well and it got the stamp of approval from my husband.
8y
Reply
Reply

willradford
The family loved it! I think I created some envy in the house from my kids loving it and my wife being flabbergasted that I put this all together!
9y
Reply
Reply

sura1965
It just improves, as you keep making it. It is a very good dish to prepare and eat.
11y
Reply
Reply

Tcrane40
I loved this recipe, I just used ground beef and it turned out great! The gravy was a little runny at first but just let it sit and it thickens up.
12y
Reply
Reply

LuAnnCross
I was very interested in trying this - but what is cubed steak? That is a lot of liquid for the gravy than the amount of flour? Can you check you got your ingredients right?
12y
Reply
Reply

AnnieBananie
I served this with garlic mashed potatoes and corn on the cob. It was a delicious meal. I would have preferred that the gravy be thicker, but would try it again to make sure I didn't measure something wrong. Other than the gravy issue, I really enjoyed this dinner.
14y
Reply
Reply

AnnieBananie
This was fairly quick and very easy to fix. [I posted this recipe.]
14y
Reply
Reply