Try this Cream of Chicken Soup with Wild Rice recipe, or contribute your own.

Cook wild rice according to pkg. directions for 30 minutes; drain off liquid and rinse. Set partially cooked rice aside. In a large Dutch oven or stockpot, combine the chicken and water and bring to boiling. Reduce heat, cover and simmer for 35 to 40 minutes or until chicken is tender. Remove chicken from broth and let stand until cool enough to handle. Skim fat from broth. Strain and reserve broth. Remove chicken meat from bones. Cut into bite-size pieces. In the same pot, cook mushrooms in hot oil for 4 to 5 minutes or until tender. Add onion and celery. Cover and cook for 5 to 10 minutes or until tender, stirring once (Id probably do the onion and celery first, until transluscent, and then add mushrooms and cover and cook). Remove from heat. Return broth to the stock pot. Add partially cooked wild rice to the chicken broth. Stir in the granules, white pepper and salt. Bring to boiling and then reduce heat and simmer, uncovered, for 15 minutes. In a large saucepan, melt the butter and stir in the flour until smooth. Add milk all at once. Cook and stir until bubbly. Stir into soup mixture. Stir in the chicken pieces and wine, and heat through. Makes 8 servings. 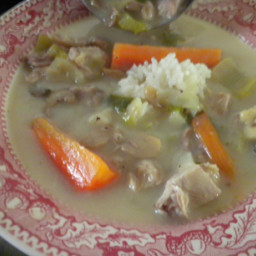 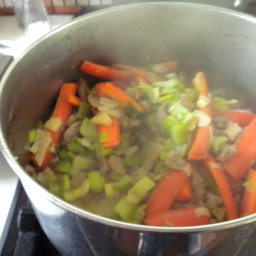 suatee the veggies in the same pot. 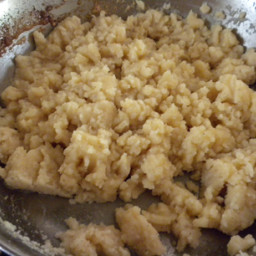 butter and flour cooking until this consistency. 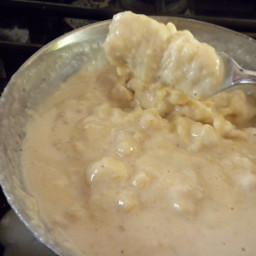 after the 1 c. milk is added 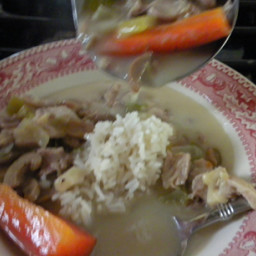 mpau0516
I've found this recipe, and I had some leftover celery and carrots from last nights buffalo wings, so I gave it a try. The recipe's ingredients call for bullion cubes, but doesn't say where to put it in. The 4 cups of milk is way too much. So this is what I did... I cooked the chicken as directed. Instead of water, I used the Swanson 1 lbs. 33% lower sodium chicken broth and water to cover my 5lbs of chicken. I let that cook up while I cooked some white rice and reserved. Then I chopped up the celery, carrots, a leek, a parsnip, 1 whole onion and sauted that in the same dutch oven after removing the chicken and broth. . After the chicken was cooked, I had to put the colander in another dutch oven... then dump the chicken in there, so as to reserve the broth and chicken. Remove the chicken and place on the counter to cool. While the chicken cools, sautée the veggies in ¼ butter so the veggies are par buttered (boiled) about 15 minutes, then add the mushrooms and cook for about 5 min. Then add back the broth to the same pan through a strainer. Chop up the chicken into bite size pieces and add it to the pot. I then took a small frying pan and added the 1/2 lbs butter and melted. Put 1 cup of flour in there, and stirred till bubbly. I added about a cup of milk to make a slurry. Then I chopped up the chicken to bite sized pieces. The chicken with the skin on it was moister than the chicken thighs without skin. I added the chicken to the pot, added a sprig of rosemary, and stirred in the paste. Bring to a boil, stirring constantly, and voila! boil and stir breaking up clumps vigorously. Then simmer until carrots are cooked through, about 10 minutes. We drank the wine, so it wasn't included. I also cooked 1 cup of white rice, and kept it separate, because if you add it to the pot, it makes glop. When serving, put some rice in a bowl, and add soup. Delicious! Thanks for the base recipe!
9y
Reply
Reply

Remopcr
Needs more salt and maybe even a little heavy cream in place of some of the milk. Also adding garlic and carrots sounds good.
11y
Reply
Reply

kellygiese
I added 2 Cloves of Garlic and some white rice I had leftover; also added carrots...very yummy!
14y
Reply
Reply