Silky smooth, rich and creamy, creme brulee has led a resurgence in the popularity of traditional desserts. Previously relegated to the more generic category of baked custards, creme brulee and its flavorful variations are now staples of many restaurants' dessert menus.

Preheat oven to 325 F degrees. Combine the cream, salt and two-thirds cup of the sugar in the saucepan over medium heat, add the vanilla bean. Heat stirring occasionally until very hot, but not boiling. Remove from heat and allow the vanilla bean to sit in the cream mixture to infuse it with flavor.

Stabilize the bowl by placing a damp kitchen towel underneath to secure it. Place two-thirds cup of sugar and the egg yolks in the bowl and whisk together.

Remove the vanilla bean from the cream mixture. Temper the hot cream mixture into the egg yolk mixture by ladling it in a stream while whisking vigorously. Once combined, strain through a fine mesh sieve back into the saucepan.

Bake for 35 minutes and check doneness by tapping the edge of each ramekin. If the centers still appear "liquid," continue baking at 3-minute intervals, checking custards carefully at the end of each. Total baking time is about 45 minutes. The custards are ready when the centers are just barely set and jiggle like jelly. Remove the entire water bath from the oven and place on a wire rack to cool. Allow the custards to cool to room temperature in the water bath.

Remove ramekins from the water bath and dry bottoms. Cover with plastic wrap and refrigerate until fully chilled.

Note: You may replace the vanilla bean with 3 teaspoons of vanilla extract, by adding it to the cream mixture before heating. 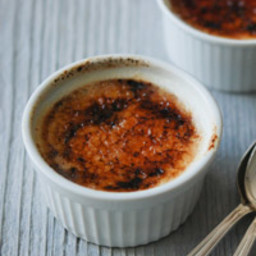 The strawberry fan is created by slicing and twisting the strawberry and using fresh mint to replace the typical soggy leaves of store bought strawberries.

stevemur
[I made edits to this recipe.]
12y
Reply
Reply