Try this Crockpot Chili Verde recipe, or contribute your own.

First, saute one onion and one green pepper, coarsely chopped, with three or four cloves of garlic, minced, in olive oil. Throw into the crockpot. Also throw in a small can of diced green chiles. Depending on your propensity for spicy food, you may add from one to three jalapenos, sliced. Then, throw some tomatillos in the pot. How many? Well, when I got fresh ones in San Diego, Id get seven or eight. Peel off the husk and coarsely chop. Now that Ive moved to Pittsburgh (dont ask me why), Ive had to use canned ones on occasion. How many? Well, I dont really remember, it was one medium sized can, I think. Pay attention: I mean tomatillos, not green tomatoes. The Frugal Gourmet substituted celery and tomatoes. I havent forgiven him yet. Take about 2 pounds of lean pork (I trim off all the excess fat I can), cubed, and brown in the pan that you sauteed the onion, etc. in. Into the pot. Now, the seasoning mixture. I prefer to grind up in my mortar oregano, some dried red chile peppers, sage, and cumin seed. Perhaps also some black pepper. I almost never put salt in anything, so I probably wouldnt here either, but you may want to. How much? Well, about 2 tsp each of the oregano and the sage. 1 tsp each of the cumin seed and dried red peppers. Salt and pepper to taste. I probably will add a dash of beer (about 1/2 cup) for obscure reasons. This crockpots all day, or could be simmered for probably about 2 hours. Traditionally, this is served in bowls, with hot flour tortillas, salsa, and cilantro. You can also have sour cream, grated cheese, olives, and pickled carrots and jalapenos around. Of course, you wrap all this up in the tortillas, making killer burritos. I throw one twist into this, a technique that comes from carnitas. After cooking, I separate the meat from the broth, crisp the meat under the broiler, and reduce the sauce in the pan. This adds a great texture to the meat, and keeps the burritos from being too soggy. This is not what the original requester would want to do. 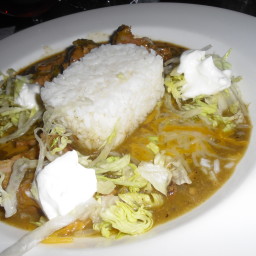 kyleeann71486
Added green enchilada sauce. Made it more thick. And I would definitely do more pork next time, especially if you want leftovers.
2y
Reply
Reply