1) Combine rub ingredients in a small bowl and rub on both sides of the ribs, focusing on the meaty side. Because of the way the ribs are in the slow cooker, it is best to leave the membrane on or they will break apart when you remove them. Because the membrane doesn't really sink in well, so don't focus on the underside. Place the ribs on end around the bowl of the slow cooker, meaty side out and wider edge down.

2) To make the sauce, mix all ingredients in a medium saucepan and heat over medium high until boiling. Pour over ribs, cover and cook on low for 6 hours.

3) After 6 hours, remove ribs (meaty side down) and place them on a rack which has been placed on a foil-covered baking sheet. Tent with foil and strain the juices left in the slow cooker into a small saucepan. Let the sauce sit for about 5 minutes and then skim off as much fat as you can. Bring the remaining liquid to a boil and reduce over medium heat until about halved in volume, 10-15 minutes.

4) Brush ribs with sauce and place 10" below broiler (lower-middle rack) and broil on high for 3 minutes. Remove from oven, carefully flip, and brush meaty side liberally with sauce. Put under broiler for 9 minutes, removing every 2-3 minutes to baste with more sauce. Serve any remaining sauce on the side. 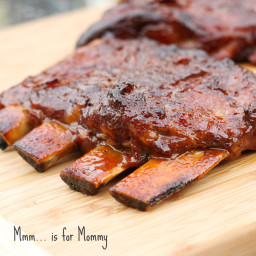 TraskL
These ribs were OUTSTANDING! Lots of messing around with them, but the final product is worth it!
6y
Reply
Reply