Inspired by the NY Style bakeries I grew up loving

These Crumb Buns are very time consuming, but definitely worth the effort.

Place water in the bowl of your electric mixer, sprinkle with yeast and add sugar, stir until yeast is dissolved.

Set aside for 10 minutes or until foam and a few bubbles start to form on the surface.

In a small saucepan, over low heat, warm the milk and butter until butter just melts.

Temperature of the mixture should not be more than 105°F

Add the butter/milk into the proofed yeast mixture,

Stir. Add eggs and vanilla and mix to combine

Beat on low speed until smooth and well blended.

Add 2 cups of the remaining flour and, with your mixer on slow, blend it in to the mixture.

Slowly add the remaining flour in 1/4 cup increments until the dough forms a smooth, soft ball that comes away from the sides of the bowl.

It may be necessary to do this last step by hand with a wooden spoon if your mixer is not a heavy duty model.

If using the heavy duty mixer, install the dough hook and mix until the dough is smooth, about 3 minutes. OR, knead by hand for about 5 minutes on a lightly floured board, it should be smooth and will no longer stick to the work surface.

Transfer the dough to a bowl that's been well buttered; flip it around a couple times to coat all sides of the ball.

Cover with plastic wrap and set aside in a warm place to rise until it's about doubled in size.

Using your fist gently punch down the dough to deflate.

The dough is now ready to form into buns

While your dough is rising, about 20 minutes before it's done, prepare the crumbs.

In a large bowl with an electric mixer on low speed beat the butter, sugars, salt and vanilla until the mixture is well combined, about one minute.

Add the flour and the cinnamon

After punching down the dough, divide it into two portions, cover.

On a lightly floured surface, roll out one portion of the dough until it forms a 8x14 inch rectangle about 1/4-inch thick.

Brush the dough lightly with some melted butter and evenly sprinkle 3/4 cup of the crumb mixture over the buttered surface.

Press gently on the dough so the layers adhere and pinch around the edges to seal.

Cut the rectangle into 7, 2-inch portions.

Repeat with second half of dough.

Brush the top of each bun with melted butter and sprinkle the remaining crumbs over the mixture allowing some to fall between.

Gently press the crumbs into the top of the buns.

Cover pan with plastic wrap and set in a warm place to rise for about 30 minutes or unit the dough looks puffy.

The buns should NOT be touching.

Remove plastic wrap from the buns

Bake for about 40 minutes, until the tops are golden brown and the crumbs are slightly firm.

The buns will have spread into one large pull apart pan of buns.

Allow to cool on a rack for about 10 minutes.

With a small sharp knife cut along the sides of the pan and carefully remove buns so as not to disturb crumbs.

Transfer to a rack to cool,

To store remaining Crumb Buns:Cover and store at room temperature for 2 days 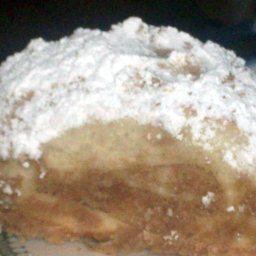 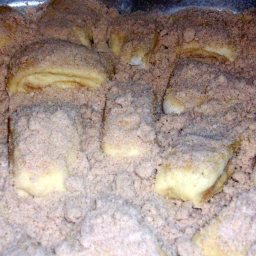