1. Combine pickles and peppers in a small bowl. Split rolls in half, spread top half with mayo and bottom with mustard.

2. Layer ham, pork, pickle mixture, and cheese onto bottom half, finishing with cheese on top. Set tops of rolls in place and press down to flatten sandwiches.

3. Heat large nonstick skillet over medium low heat for 4 minutes. Butter outsides of sandwiches. Place them in the skillet. Compress the sandwiches, pressing down with a large pot, for about 20 seconds. Continue to cook, leaving pot on top of sandwiches but not pressing down until first side is golden brown, 3 to 5 minutes.

4. Remove the pot, flip the sandwiches over, replace pot on top of sandwiches, and cook until golden brown, 3 to 4 minutes more. 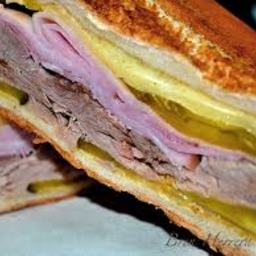 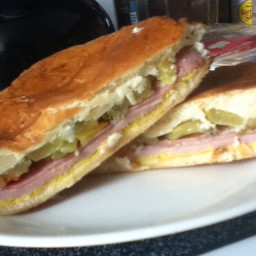 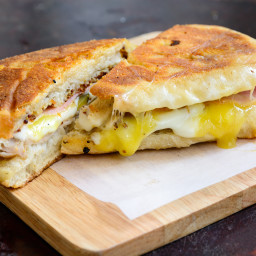 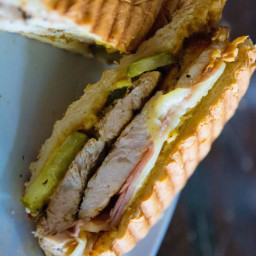 usefaeth
Loved it. I used Vienna rolls. They were perfect. I also just melted the butter and swiped on the outside. Very Easy. Kids ate a regular one and liked there favorite cheese and no mustard better. boys! lol
4y
Reply
Reply

SanchoPanza
This was my lunch. Whoa does this sammy pack a punch, couldn't resist makin it what with all the meat it has goin on! My favorite sandwich so far.
8y
Reply
Reply

CYAG
YEAH!! My favorite sandwich done justice in my kitchen for the 1st time ever!!! Forget little Havana! Thank you so much
8y
Reply
Reply