If you're cutting back on Fat & Calories but still miss a hardy breakfast dish, try this. Put it over low fat biscuits and serve it with coffee.

Brown the onion and sausage in a small amount of oil. There''s no extra fat in the vegetarian sausage to you have to go slowly or it will stick badly. Crumble up the sausage as you brown it to a "ground meat" like texture.

Add the spices while the sausage is browning. Mix well to let the flavors infuse the mixture. Remove from the pan and set aside when nicely browned.

Add a bit more oil to the pan and deglaze the browned bits from the pan. Then sprinkle the flour in the oil and whisk it to get an even mixture. Let this cook over medium to low heat for a couple of minutes. It will gradually turn into a light brown roux. Don''t let it go too dark as you will kill the thickening power of the flour.

Heat the milk in a saucepan or microwave. Add the hot milk, gradually, into the roux. Whisk this vigorously at first to get an even mixture then reduce the heat and stir frequently as the sauce thickens. Add the salt while stirring. It should thicken up in 2-3 minutes to a creamy consistancy.

Add the browned, spiced sausage into the sauce. Adjust the seasonings as needed. The gravy can be thinned with a bit more milk if needed.

If you want more "gravy" and less "meat" you can double the quantities of milk and flour when you make the sauce.

Serve this with fresh baked low-fat biscuits or over whole grain toast.

Compared to gravy made with pork sausage, whole milk, and bacon fat roux this recipe cuts the far by about 90% and the calories by almost 50%.

This doesn't have the rich "mouth feel" of the high fat version but it's pretty good and lots better for you.

It's not as good as the real thing if served "side-by-side". But if you HAVE to cut back, this is a good compromise. 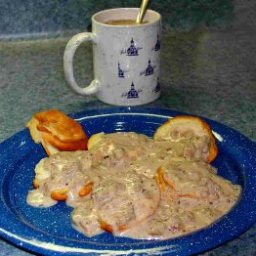 bbqernie
I made this and it is pretty good. I used skim milk, pork and an extra TBS of flour. Next time I'll use less flour and less red pepper; a little too spicy for me. Thanks for the recipe. bbqernie.blogspot.com
11y
Reply
Reply

promfh
It's not as good as the real thing if served "side-by-side". But if you HAVE to cut back, this is a good compromise. [I posted this recipe.]
15y
Reply
Reply