This recipe is from my friend Linda Sue at www.genaw.com

In a medium bowl, whisk the cream cheese until smooth and creamy. Whisk in the eggs until the mixture is well-blended and smooth. Add the parmesan and seasonings, then stir in the 8 ounces of mozzarella until completely moistened. Spread the cheese mixture evenly in a well-greased 9x13" glass baking dish or lightly greased and lined with parchment paper (see note below). Bake at 375? 20-25 minutes or until evenly browned, but not too dark. Let cool completely on a wire rack. When nearly cooled, take a metal spatula and carefully pry up the edges to loosen from pan. Ease the spatula under the whole crust to loosen. Keep the crust in the pan. This makes it easier to remove the finished pizza later. Refrigerate, uncovered, until shortly before serving time.

I don't recommend making this in a metal baking pan as it will stick making the pizza very difficult to remove and the pan very hard to clean.

I think I may have discovered the secret to a crispy crust. I left the baked crust uncovered in the refrigerator for several hours. I think that allowed it to dry out a bit so that it became crisp during the second baking with the toppings. I was able to pick the pizza up in my hands.

NOTE: If you lightly grease the pan and line it with parchment paper, you'll have no trouble removing the pizza from the pan later. Greasing the pan makes the parchment stick to it so you can easily spread the crust batter. 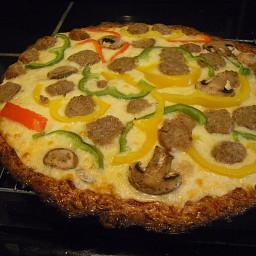 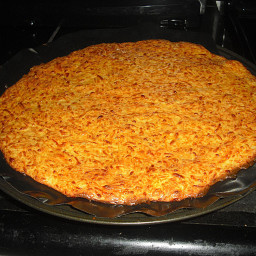