Before we moved to KL, I have never tried chilli pan mee 辣椒板麺 before. Nowadays, it is a weekly staple for us. Pan mee (板麺), literally translates to "flat flour noodles" and can either be served with soup or dry. My favorite version is the chilli pan mee, which originated in Kuala Lumpur.  Some of our favourite chilli pan mee shops in KL/Selangor include Super Kitchen, Madam Chiam Curry Noodle House and Kafe Jojo Little Kitchen - each with their own unique points.

A typical bowl of chilli pan mee consists of dry noodle, minced pork, fried shallots, fried anchovies (ikan bilis), poached egg/soft boiled egg (depending on the outlet) and dry chilli flakes. How spicy your bowl of noodles is dependent on how much chilli flakes you put in.

This recipe that I am sharing is modelled from Madam Chiam's chilli pan mee. I used ready-made pan mee noodles which I got from the wet market, however if you would like a recipe for homemade pan mee noodles, please drop me a comment below and I can post a recipe when I have the time. :) Nowadays, it is easy to get pan mee from the wet market or even supermarkets. I have also seen dried pan mee in packets in hypermarkets. The noodle I used is thicker than Madam Chiam's but it has a really nice texture.

1. Heat the oil in large wok over medium high heat, then add the dried anchovies and shallow fry until crispy, for about 3 minutes. Remove with a slotted spoon and set aside.

2. Using the same wok, shallow fry the shallots until golden brown, this will take about 1 minute over medium heat. Remove with a slotted spoon and set aside.

3.  Now, add the pork mince to the wok and stir fry for 2 minutes over medium high heat until cooked through. Add the ginger wine and light soy sauce, and cook for a further 2 minutes until the pork looks browned. Taste and season more if required, then remove from heat and set aside.

4. You can prepare the soft boiled egg, soup and cook the noodle simultaneously in different pots now. For the soup, place the water, dried anchovies and old ginger slice in a small saucepan and bring to the boil over medium high heat. Once boiling, allow to simmer for 10 minutes. Just before serving, discard the anchovies and ginger slice and add the spinach leaves and stalks and cook lightly for 30 seconds.

5. Bring a large pot of water to the boil. Once boiling, add the fresh pan mee noodles and cook until the noodles are soft but still with a bite to it. For the noodles I used, it took about 7-8 minutes. You can tell if it's ready by tasting a strand and see if it's cooked to your preference.

6. To assemble, first place noodles in a bowl. Crack the soft boiled egg into the bowl of noodles, then divide the minced pork, fried shallots and fried anchovies equally between the two bowls. Finally, top with the calamansi. Squeeze the calamansi juice over the noodles just before eating. You can place 1 teaspoon of dried chilli shrimp paste in the bowl and serve more on the side for those who prefer spicier noodles. Serve the spinach soup in a separate bowl.

Mix everything together and enjoy! 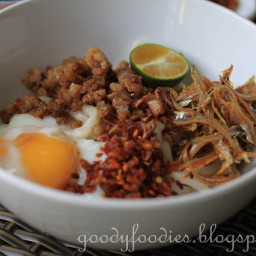