Then crumble the cake in a large bowl.

Add the icing. Smash it together and form into a thick disk – a spatula works but hands work better. Wrap in plastic and put in the refrigerator for about an hour to stiffen up.

There is a great type of measuring spoon for making the balls or cookies. It is a hard plastic with a rubber bottom so the portions are even and you can easily push the dough out. It comes in several sizes and I’ve seen it at most kitchen stores, the grocery store and even at the dollar store. For this, I used the Tablespoon size, rolling them into egg shapes and placing them on a cookie sheet.

Next wrap the tray in plastic wrap and place them in the fridge for 10-15 minutes.

I have tried two methods of dipping, using a toothpick and putting them on a styrofoam floral stand that I got from the dollar store and just using a fork and putting them on waxed paper. I find that the fork works better for me but they each have good and bad parts. In order to get them to stay on the toothpick, I had to freeze them, which then caused the chocolate to crack as it hardened but they seemed to have the best shape if you can keep them on the toothpick. Any little drips on the bottom can be trimmed with a sharp paring knife.

I switched to “warmer” balls on the fork letting them harden on a piece of waxed paper, which seemed to solve the falling off/cracking problem and seemed to be faster. It sometimes leaves a bit of a flat base, but that is easily trimmed with a sharp paring knife or you can just leave it and serve them with that side down. I used both white and dark chocolate, adding gel food color to the white to make a couple different colors. Make sure you keep the chocolate warm, if it starts to thicken heat for a few seconds in the microwave to keep it easier to dip. When it gets thick it also makes them more likely to crack (I’ve learned these things from the error part of trial and error). The good news is that I learned the decorating can cover up the cracks pretty well!

I used a spray on food color on some of the white ones which made a sort of marbled effect that I liked. I tried someone’s suggestion for painting corn syrup on then putting sprinkles, but I just didn’t like the way it looked and am not that much of a sprinkle fan anyway so I ended up using the colored white chocolate instead. Plus, that worked perfectly to fill in any cracks. I always use a small plastic squeeze bottle when decorating with chocolate, you can get them from Wilton at the craft store or pretty much anywhere and they are very inexpensive. Just melt the chocolate in a small bowl in the microwave. Depending on how much you do at a time it can take from 1-2 minutes. I start with 1 minute, then stir and do 15 second increments until it is melted, then pour it into the squeeze bottle.

Molding and trimming the chocolate baskets

I also used a chocolate mold (from Wilton that I got at Wal-Mart) to make some little baskets. You just melt the chocolate, put it into the bottom of the mold then put the top. Using the same sharp paring knife I trimmed off any excess before I unmolded them as sometimes it was hard to judge just how much chocolate to put into the mold – the directions on the package just say fill “half full” but there are no markings so you just have to get a feel for it. 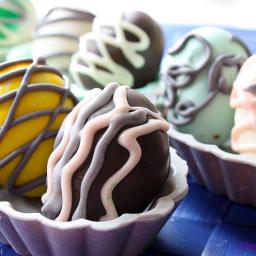 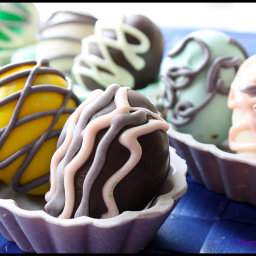