A classic holiday nog with an extremely fluffy texture due to the separation of yolk and white. its worth the effort in this sure fire crowd pleaser.

In the bowl containing the egg yolks, beat the yolks using a mixer, if you have one.

Slowly add in half of the half-cup of sugar, while still mixing.

When really well mixed, set the yolk & sugar bowl aside and begin work on the egg whites.

The egg whites need to be beaten stiff with the other half of the sugar.

Combine the egg whites and the yolks and continue mixing on low speed.

Stir in the rum, then the milk, then the whiskey, then half of the cream.

In a separate bowl, whip the other half of the cream.

When whipped, gently fold the cream into the eggnog mixture.

Ladle room temperature eggnog into cups and sprinkle with a small amount of nutmeg. 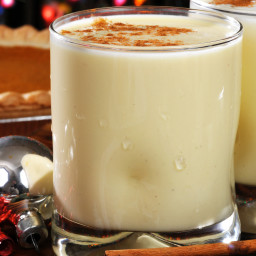 guarinol
This is a great recipe although I usually do the whites in the mixer first so I assure the bowel is clean so they get a lot of lift. I also don't follow the alcohol in this. I think it is too strong for most people. Oh and this recipe leaves pit cinnamon and vanilla but I usually throw it in.
7y
Reply
Reply

zipp2001
So I just made this and I have to say if you enjoy the booze taste more than any thing it may be good for you. I did not like it all. But that is just my opinion because I not in to drinks with a strong taste of alcohol. But if you like a kick then give this one a shot.
8y
Reply
Reply

noelle.hughes
I think it calls for too much alcohol, so I scaled it back to just one cup of high-quality brandy. On the second try, I skipped separating the eggs and just tossed the lot in the blender. It was fabulous and only took a few minutes to make!
9y
Reply
Reply