If you’re trying to avoid carbs, this is a great dish. It has vegetables, a little ground turkey and some mozzarella. I love spicy food so some red pepper flakes are involved, but that’s optional.

Prepare Ground Turkey: When it comes to meats I usually prefer lime or lemon over vinegar. Once the meat has thawed, we start by adding the lime/lemon juice, salt, paprika, oregano, pepper flakes, black pepper and coriander. In a food processor, add 1 onion, cubanelle pepper, celery, 4 garlic cloves, and cilantro to make your own fresh sofrito, then add the mix to the meat and let it sit for 10-15 minutes. After the wait, put about 2 Tbsp oil in a saucepan on medium heat. Once the oil is hot add the ground turkey. Let that simmer for 15-20 minutes, stirring every now and then to ensure an even cook and no burning. Once the liquid in the pan is consumed, take it off the heat. Either leave it in the pot for now, or store aside for later.

Prepare the eggplant: Peel the eggplants and slice them lengthwise. Think of grinder rolls, but only about ½” thick. Each eggplant should give about 6 slices. Put the eggplant slices on a skillet with a bit of oil and a pinch of salt. Put a few slices in at a time, and make sure to flip often to avoid burning. You can apply pressure to get some of the water out. Eggplant tends to be a bit spicy so I would not recommend any type of pepper on the eggplant itself. The key here is to cook them, but not too much. We don’t want them to get too soggy or mushy. We’re looking for a soft but sturdy texture. Once they’re done it’s time to put our sandwich together.

Sandwich assembly and finishing touch: This part is pretty simple, basically making a sandwich. One eggplant slice, some ground turkey, diced tomatoes, basil, and cheese covered with another eggplant slice. Pop that in the oven for a few minutes so it warms up and the cheese melts. When desired level of gooey goodness is achieved, plate and enjoy.

This part is pretty simple and quick. Dice up the zucchini in 1? pieces. Pour about 2 Tbsp oil in a saucepan or wok at medium heat. Add finely chopped ½ onion and 1 clove garlic. Let it simmer till the onion is slightly brown. Add a pinch of ground ginger, a ½ tsp black pepper, and ½ tsp red pepper flakes. After about 2 minutes add the zucchini and shake it often so it doesn’t burn. You want the zucchini crunchy and white. Overcooking will leave you with a lump of discolored mush.

Once the Zucchini is served sprinkle a bit of soy sauce, tamari, or my favorite, shoyu. Be careful not to drown it or it will get too salty.

Be careful to not overcook eggplant or zucchini. The texture is very important. 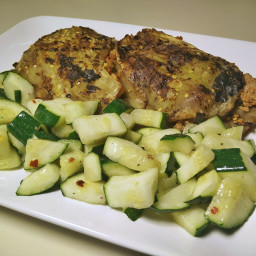