The cornerstone to this dish is high quality stone ground grits, not the instant or quick cooking kind.

The grits & meat cook at the same time, but for simplicity I'm breaking them into two sections.

Start a covered pot with grits, water, broth, & salt at the same time you start heating the pan to sear the meat (see next paragraph). Bring to a boil, reduce heat to low, and simmer 25 minutes, stirring often (think risotto). Add cheese and butter, cook for 5 more minutes. You don't want this runny, you want it thick where it will hold it's shape when scooped onto a plate. But if you think it's drying out too much while cooking, you can add a bit (tablespoons) of broth or water.

Rub the pork with the salt, lemon pepper, and tarragon.

Set up your grill for high heat (350f) indirect cooking. Specifically for the Big Green Egg, I had it running 350f with the plate setter placed legs up.

Heat a skillet over medium high heat. Add some oil (just enough to coat the pan) and sear the tenderloin on all 4 sides for about 60-90 seconds a side. Remove pan from heat and put the tenderloin on the covered grill. Cook until meat hits 145-150f internal temp. Remove and wrap in foil to rest.

Reheat skillet. Deglaze the pan with a few splashes of chicken broth. Add butter to melt. Whisk in flour. Whisk continuously until the butter/flour forms a dark roux. You want it darker than you think, because adding the rest of the broth lightens it up. Add the rest of the broth and whisk gravy to desired consistency.

Place a heaping scoop of grits on a plate. Layer slices of pork around the grits. Ladel gravy over it and top with parsley. 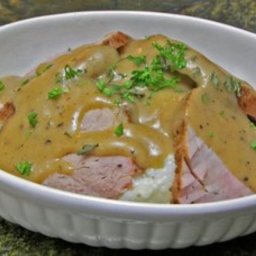 jdriemeyer
OH MY GOSH! SO amazing! Just like a bite of heaven. Served with a side of creamed cabbage. Can't wait to have it again!! Perfection.
2y
Reply
Reply

Trtlmay
This meal was delicious!! Everything came together wonderfully and complimented the flavors nicely. The gravy and grits were fabulous. The meat was juicy and tender. I felt like I was eating a restaurant meal in my own dining room.
5y
Reply
Reply

Saswindler
I would add some veggies - such as potatoes, carrots, water chestnuts, baby corn and other... for texture... I didn't keep time of how long it took because it was a family gathering and we would sit and talk a while then I would continue preparation.
10y
Reply
Reply