Mix dry ingredients together well. Cut cold lard into flour with hands, a fork, or pastry cutter. Stop when there are no visible clumps of lard and it has the appearance of corn meal. Slowly add water to the dough and mix thoroughly with a fork until the dough starts to come together. Then, begin kneading the dough and add water little by little until it forms a cohesive ball. Apply a small amount of lard to hands and knead the dough for an additional 3-5 minutes.

Now, form a ball, lightly coat with lard from your hands, and leave to rest for 15-20 minutes under a kitchen towel, cling film, or bowl on the kitchen counter.

Once rested, the dough is ready to form into testales (small portion of tortilla dough, shaped into a flat, round puck).

Use your thumb and index finger to form a ring, like the "OK" sign, and pinch off golf-ball size portions of the dough. Being careful not to twist or warp the dough more than necessary, use your fingers to lightly pinch the dough into a ball shape and then a small puck shape. Do not attempt to make a perfect circle by rolling the ball in your hands with pressure like when making meat-balls. We want to preserve the internal gluten structure of the dough ball. Carefully forming small balls (bolitos) and then round pucks (testales) helps prepare the tortillas for rolling out into a smooth circle.

Place the testales in a lightly floured baking sheet and cover them with a slightly damp kitchen towel or cling film.

Once all the testales have been formed, it's time to roll out and cook the tortillas. Preheat a cast-iron skillet or flat round griddle, also known as a "comal", on medium heat. Line a container or bowl with paper towels to place the finished tortillas.

Lightly flour your work surface and use your hands to make sure the testal is nice and round and use the opportunity to flatten it out a little more. Using a skinny, un-tapered rolling pin, lightly roll out the tortilla into an oval shape, then flip and turn the dough 90 degrees. Keep rolling, flipping, and turning until the tortilla is as flat as possible (1-1.5 mm).

Place the tortilla on the comal and let sit 30 seconds or so before flipping. A well-kneaded, very thin tortilla dough in a properly-heated skillet should form air bubbles over the surface of the tortilla. You can use the formation of these bubbles as a guide as to when the tortilla is ready to be flipped. If bubbles don't form, be careful to still flip the tortilla without burning it. If the bubbles get too large, use a spatula to knock them down. We are looking for light brown spots to appear over the surface of the tortilla and for all raw, darker areas of the tortilla to turn white. How brown you like your tortillas is personal preference, I prefer a tortilla with few to no black spots. In all, it should take about 1-2 minutes to fully cook a tortilla, flipping 3-4 times.

Keep uncooked testales covered and separately cooked tortillas in a stack in a closed container or covered with foil. After cooking tortillas will often seem a little dry or crunchy. Letting the tortillas mingle will help bring back some moisture, making them tender. This is an important step in the cooking process.

Like many baked goods, the first few tortillas may not turn out as well as the rest. These can be the cook's treat--tortillas taste great fresh off the skillet with some butter!

Storing Tortillas: Tortillas can be left a room temp for 3-5 days. Refrigerate in a ziplock bag to preserve.

Reheating tortillas: The proper way to reheat a tortilla is over the open flame of a gas burner. Turn the heat to medium and rest the tortilla directly on the flame as you flip and turn to evenly heat through, letting it rest for no more than 3-5 seconds at a time.

Alternatively, you can reheat in your comal or cast-iron skillet.

Tips: Reduce baking powder for a more tender, less fluffy tortilla. Use cold water for an even more tender tortilla, though difficult to work with dough.

Knead the dough well and be careful when forming the testales (puck shape)! 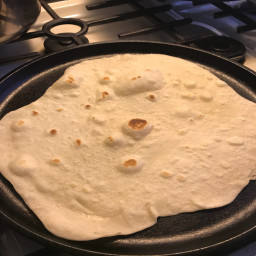