Adding mushrooms and prime rib (or any other leftover steak) turns this starter into the main course.

Cut ends off of the onions and slice in half. Peel off the the papery outer layer. Thinly slice all the onions. You can leave the onions whole and slice them, but I find it much easier to fit the onions on my spoon when I'm eating if they've been halved first.

Over med high heat heat the butter and olive oil in a large dutch oven or heavy bottomed pot. You may use olive oil only, I like the flavor that the butter adds. Add the onions and cook until carmelized. Note: don't stir too often, it's tempting, but don't. When the onions are nice and carmelized (about 10 minutes) add the mushrooms and cook for another 3-5 minutes. Add the diced prime rib and cook for about another minute.

Slowly add the first can of consomme, stirring and scraping the bottom of the pot, so that you release all the tasty stuff that sticks to the bottom of the pan. Next add the remaining two cans of the consomme. Turn the heat down to low. Time for thyme, you can either strip the leaves off and chop or for the lazy folks like me, I just tied butcher string around the sprigs, dropped them into the soup and tied the string to the handle so I could fish them out later with ease. Simmer for another 15 to 20 minutes. Add black pepper and the fresh parsley.

Ladel into individual oven safe bowls. Top each serving with two slices of the baguette, then grate the parm onto the top. Place under the broiler until the cheese is hot and bubbly and starts to brown. 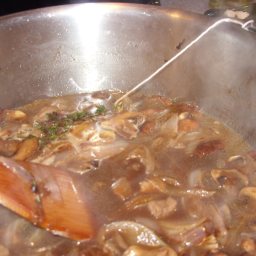 Thyme on a string. 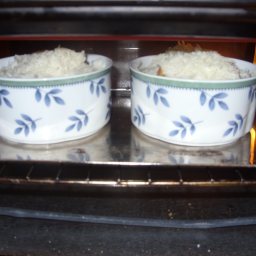 A toaster oven is perfect for broiling two servings. 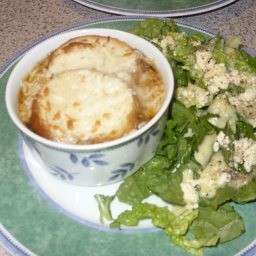 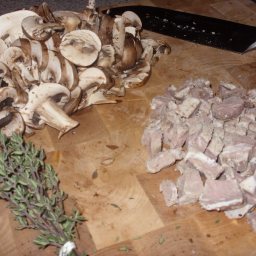 danaellis
I used some leftover boneless ribs to make this soup. It turned out great. Nice flavor. I enjoyed repurposing my leftovers. It was a win/win.
8y
Reply
Reply