This warm hearty soup is great on a cold day with plenty of bacon and thick rich creamy soup goodness. Enjoy

Cook the full package of bacon saving about 2 Tablespoons of drippings. Once Bacon is fully cooked and crisp, cut in to bite size pieces. Set aside for adding later.

Mix together the Beef broth and chicken broth in a stock pot with the remaining 3 potatoes (peeled and cubed) and the carrots. Bring to boil and let simmer until the carrots and potatoes are soft. Add basil and season salt and pepper to taste.

Using an immersion blender, blend the broth mixture to liquid only and continue to simmer until the broth is nice and thick.

In a frying pan add the Bacon drippings you saved with the onions and garlic. Sautéing until the onions are nice and brown.

Add frying pan contents to the stock pot full of thickened broth and mix well. Make sure your both is no longer boiling and add the half and half. ****At this point do not let the soup boil again but heat it up to hot again.

Remove Potatoes from the oven when cooked, remove foil and chop in to large cubes (4-6 cubes per potato.) and put in the thickened broth.

Simmer the soup for 1/2 hour to get the flavor in the potatoes, stir occasionally.

When you serve garnish with Cheddar cheese and Chives. 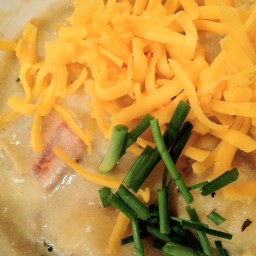 stephrichmond
Loved this it made a filling meal for my personal taste I added a little worcestershire sauce and next time will try it with a small amount of red chilli. A fantastic warming meal. Hubby said scrumptious :) an all round winner
7y
Reply
Reply

FoodieSarah3
Amazingly filling with lots leftover! All the flavors came together and made for a fantastic soup. I left quite a bit of skin on in the process and it was nice added texture. YUM!
7y
Reply
Reply

Caydeterry
I boiled my potatoes separate and then set aside. Added them after with the bacon into the yummy broth!
9y
Reply
Reply