This is adapted from a cookbook called "Fun with Garlic" that was assembled by the cast of a Los Angeles production of "The Phantom of the Opera" way back in 1992. The original recipe is called "Grandma Cecilia's German, Hungarian, and Polish Garlic Cream Soup" and is contributed by cast member Barbara Lang.

Pour most of the broth into a second pan (leaving behind the solid ingredients). Whisk the flour into 1/2 cup of the sour cream, then add the remaining sour cream. Whisk this mixture slowly into the broth, while slowly heating. Do NOT allow the sour cream and broth to boil. After whisking in sour cream, add beans and simmer (but do NOT boil) for 10 minutes.

This may taste better if left to refrigerate overnight.

Serve with crusty white bread and horseradish, dipping the sausage into the horseradish.

Try adding sliced mushrooms at the point where the potatoes are added. 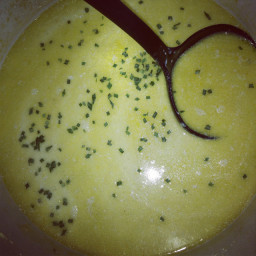 brewtal1
I thought the soup was very bland so I added oregano, bay leaf, salt and pepper. I also doubled the recipe. Worked well. After the adjustments it was a great soup!
12y
Reply
Reply

UncommonCook
Very hearty,which was good, but the recipe was quite bland "as is." I added about a tablespoon of rubbed dried sage, several grinds of back pepper and a couple of bay leaves and simmered that an extra half hour or so. With those additions, I'd bump it up to 4 stars.
12y
Reply
Reply