Have ready a steamer large enough to accommodate the potatoes. Prepare the pan with water.

While that is happening, cook the bacon until crisp in a skillet, or microwave. Do NOT throw away the fat!

When the potatoes are fork tender, put them in a bowl with the chopped onions. Crumble the bacon over all.

If you cooked the bacon in a pan, heat the pan on low, then add the vinegar and mustard to the pan, and whisk until well mixed. Then add the mayonnaise and whisk briskly to combine. If you used a microwave oven, put the fat in a saucepan, and heat it as previously described.

Pour the mixture over the potatoes, and toss to combine. Refrigerate until ready to serve.

Try to get a German whole grain mustard. Yellow mustard will not work in this, it''s too sour. If you want to make this vegetarian, you could use olive oil instead of bacon fat, and add walnuts for crunchiness. 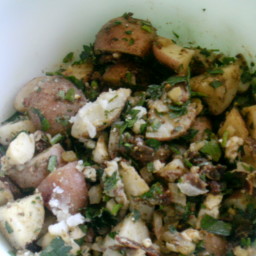