inspired by the Matterhorn Grill in Flagstaff, AZ

In a small mixing bowl, mix gelatin and sugar. Add water and stir until gelatin completely dissolves. In a large bowl, beat cream cheese and vanilla with an electric mixer until fluffy. Gradually beat in gelatin mixture until smooth. Fold in sour cream. Fold in whipped topping. Put the resulting blob into the refrigerator to set. I used a brownie pan which spread it out and probably accelerated the process.

After an hour or so take the filling from the refrigerator. Place one of the cake layers on a serving plate. Scoop the cheesecake filling on top. Place the second cake layer on the top. Sprinkle top with powdered sugar, and, if desired, artfully drizzle on some Raspberry Chambord sauce. Store in the refrigerator.

Optional Raspberry Chambord Sauce - put the raspberries, strawberries and lemon juice into a blender and make a smoothie. Pour the result into a pan, stir in the sugar and bring to a boil. Reduce to a simmer, stirring continuously for about 10 minutes or until thick enough to coat the back of a spoon. Take off heat and cool for 5 minutes. Add the Chambord and cool to room temperature. Store in fridge. Sauce is terrific on vanilla ice cream. 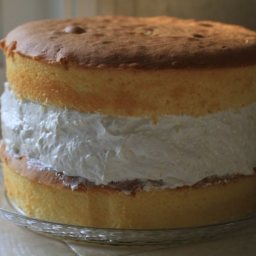 ChefGregoire
After a bit of a hiatus, this recipe has returned to the Big Oven! This is my attempt to recreate the "German Cheesecake" dessert at the Matterhorn Grill in Flagstaff, AZ. Let me know what you think and what modifications you made.
9y
Reply
Reply

samanthawaring
It looks really nice!!! But where is the recipe!!!
9y
Reply
Reply

Mactoddy
It looks great in the picture. Where's the recipe?
11y
Reply
Reply