This ice cream pie is topped with a fluffy mountain of caramel whipped cream, toasted coconut, and pecans. Haagen Daz makes a German Chocolate cake ice cream flavor, which is an appropriate and delicious alternative to the chocolate ice cream, if you like.

Preheat oven to 350 deg F. Toast pecans on a baking sheet until golden, about 10 minutes. Cool and coarsely chop. Toast coconut, stirring it several times until it is evenly browned, 5 to 8 minutes. Leave oven on.

To make crust: In a large bowl, mix crumbs, butter, and sugar until well combined. Press evenly into the bottom and up sides of a 9-inch pie pan. Bake until crust is lightly toasted around the edges and feels dry to the touch, 10 to 12 minutes. Cool completely.

Soften ice cream. Carefully spread ice cream into crust, smoothing the top. Place a piece of plastic wrap directly on the surface of the ice cream and freeze until firm, at least 8 hours or up to 2 days.

Spoon caramel sauce into a large bowl. In another bowl, with a mixer on high speed, whip cream until it holds medium peaks. Stir about one-third of the whipped cream into the caramel sauce. With a flexible spatula, gently fold in the remaining whipped cream.

Remove pie from freezer and take off plastic wrap. Whisk the cream gently to thicken to a spreadable cosistency, if necessary, and spread over the ice cream, mounding the cream slightly in the center. Sprinkle with coconut and pecans. Freeze pie until whipped cream is firm, about 30 minutes or up to 1 day.

To serve, remove pie from freezer and let stand at room temperature 5 to 10 minutes. To slice pie neatly, dip the blade of a large, sharp knife in hot water and wipe it dry before cutting each slice. Serve immediately. 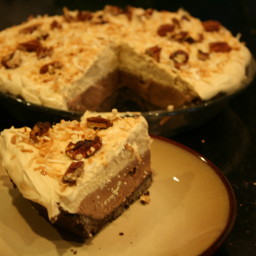