Try this German Sauerbraten recipe, or contribute your own.

Two to three days before serving, wipe the meat with a damp cloth, then place in a large plastic bag. In a large bowl, thoroughly combine vinegar, Coca-Cola, water,onions, celery, carrots, pepper, cloves, bay leaves, sugar and salt; pour over meat. Fasten bag tightly and lay flat in a 9" X 13" pan. Refrigerate, turning bag each day. (If you like sour sauerbraten, let marinate for 4 days.) When ready to cook, remove meat (saving marinade) and dry well. Rub the surface lightly with flour. In a Dutch oven, heat oil and slowly brown the meat well on all sides. Add 1 cup of the marinade liquid plus some of the vegetables and bay leaves. Cover tightly and simmer on surface heat or in a preheated 350oF oven for 3 to 4 hours until the meat is fork tender. If needed, add more marinade during the cooking time to keep at least 1/2 inch liquid in the Dutch oven. Remove the meat and keep warm until ready to slice. Into a large measuring cup, strain the drippings. Add several ice cubes and let stand for a few minutes until the fat separates out. Remove the fat, then make the gravy. TO MAKE THE GRAVY: In the Dutch oven, combine the gravy ingredients, stir and cook for about 5 minutes over medium heat until gravy has thickened. Taste for seasonings and adjust if necessary. This makes about 3 cups of gravy. From: "International Cooking with Coca-Cola", a give away pamphlet from The Coca-Cola Company, 1981. 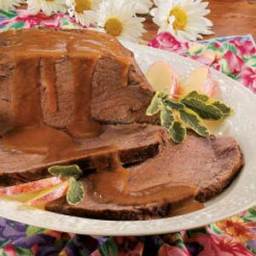