An altered version of a recipe found on Chow.com. I added Honey Whiskey to mine and switched out the flour with rice flour and made the crust from gluten free gingersnaps found at Trader Joe's. I also used a Vanilla - Cinnamon eggnog instead of traditional.

Heat the oven to 325°F and arrange a rack in the middle. Coat the bottom and sides of a 9-inch springform pan with butter. Place the cookie crumbs and melted butter in a medium bowl and mix until thoroughly combined. Pour the crumb mixture into the pan and, using the bottom of a cup, press evenly into the bottom and slightly up the sides. Bake until golden brown, about 12 to 15 minutes. Place the crust on a wire rack to cool slightly, at least 15 minutes. Mix together the sugar and flour in a medium bowl and set aside. Place the cream cheese in the bowl of a stand mixer fitted with a paddle attachment and beat on medium speed until smooth. With the mixer running, slowly pour in the sugar mixture and beat until incorporated. Stop the mixer occasionally to scrape down the sides of the bowl and the paddle as needed. With the mixer on low, add the vanilla, nutmeg, and salt and then slowly pour in the eggnog; mix until just combined. Add the egg yolk, then the whole eggs one at a time, allowing each egg to incorporate completely before adding the next. Stop the mixer occasionally to scrape down the sides of the bowl and the paddle as needed. Pour the filling into the prepared crust, tap to remove any bubbles, and bake until the edges of the cake are browned and the center is barely set, about 45 to 60 minutes. Turn off the oven and let the cake cool in the oven for 1 hour. Remove the cheesecake from the oven and place on a cooling rack. Cover with a baking sheet and let cool until the pan is lukewarm to the touch, about 1 1/2 hours. Remove the baking sheet, loosely cover the cheesecake, and refrigerate until ready to serve, up to 3 days. To serve, run a knife around the inner edge of the pan, remove the sides, and slice. 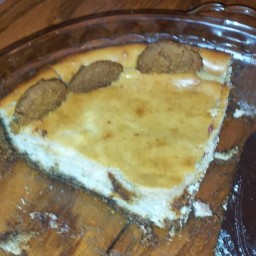 most of it got eaten before I took the picture

Serrulata
First time I ever made a cheese cake and it was easy.
8y
Reply
Reply