Gnocchi with Sage, Butter And Parmesan

Try this Gnocchi with Sage, Butter And Parmesan recipe, or contribute your own.

1 Place the potatoes, with their skins on, in a suitably sized saucepan, almost cover with boiling water, add some salt, then put a lid on and simmer for 20-25 minutes, until tender. 2 Drain well and, holding them in your hand with a tea cloth, quickly pare off the skins using a potato peeler. Then place the potatoes in a large bowl and, using an electric hand whisk on a slow speed, start to break the potatoes up, then increase the speed and gradually whisk until smooth and fluffy. Now let them cool. 3 Add the sifted flour to the potatoes, along with half the beaten egg, season lightly and, using a fork, bring the mixture together. 4 Using your hands, knead the mixture lightly to a soft dough - you may need to add a tsp or so more of the egg if it is a little dry. Now transfer the mixture to a slightly floured surface, flour your hands and divide it into quarters. Now roll each quarter into a sausage shape approximately 1"/2.5cm in diameter, then cut it, on the diagonal, into 1"/2.5cm pieces, placing them on a tray or plate as they are cut. Cover with clingfilm and chill for at least 30 mins, longer wont matter. 5 Using a fork with the prongs facing upwards, press the fork down on to one side of each gnocchi so that it leaves a row of ridges on each one. At the same time, ease them into crescent shapes. The ridges are there to absorb the sauce. Cover and chill the gnocchi again until you are ready to cook them. 6 To cook the gnocchi: Firstly bring a large, shallow pan of approximately 6 pints/3.5 litres of water to a simmer and put the serving dish in a low oven to warm through. 7 Then drop the gnocchi into the water and cook for about 3 minutes; they will start to float to the surface after about 2 minutes, but they need 3 altogether. When they are ready, remove the gnocchi with a draining spoon and transfer them to a warm serving dish. 8 To serve, melt the butter with the garlic over a gentle heat until the garlic turns nut brown in colour - about 1 minute. 9 Next add the sage leaves and allow the butter to froth while the sage leaves turn crisp - about 30 seconds - then spoon the butter mixture over the warm gnocchi. Sprinkle half the Parmesan over and serve the rest separately. Per serving: 238 Calories (kcal); 25g Total Fat; (93% calories from fat); 3g Protein; 1g Carbohydrate; 156mg Cholesterol; 262mg Sodium Food Exchanges: 0 Grain(Starch); 1/2 Lean Meat; 0 Vegetable; 0 Fruit; 5 Fat; 0 Other Carbohydrates Recipe by: Deliah Converted by MM_Buster v2.0n. 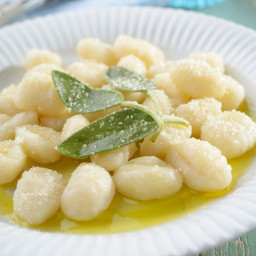 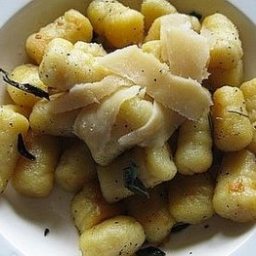 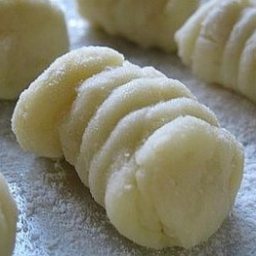 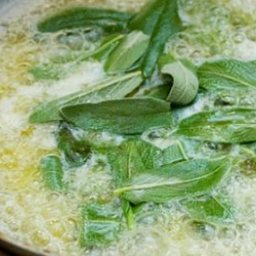 Gnocchi with Sage, Butter, and Parmesan

Gnocchi with Sage, Butter, and Parmesan

Andysutt
Really worked well. Takes a while but well worth it.
10y
Reply
Reply

dlb1975
Excellent flavours delicious!! Really quite simple husband said would be pleased if he had got in a restaurant!! Thanks
10y
Reply
Reply

NataliePomponio
I used this for the gnocchi recipe. Made it tonight and it was fabulous. Thank u :)
10y
Reply
Reply

BillyBaroo
The gnocchi was perfect. Great texture and cooked up light and flavorful. The key is to use the right potatoes.
10y
Reply
Reply

Yoinceso
I really was amazed by this. It sounded like it might be a bit Meh... It's not it's AMAZING
10y
Reply
Reply