Menu Description: "With vanilla ice cream and sticky bun caramel sauce."  I've been searching for the restaurant chain with the best bread pudding recipe, and I think I've found it here at Gordon Biersch. This small, yet growing, microbrewery chain serves great beer, awesome pizza, and a bread pudding that is downright amazing. It could be described as what would materialize out the other side if Jeff Goldblum threw an apple pie, some bread pudding and a cinnamon roll into his teleportation machine from "The Fly," and everything came out the other side combined into a single awesome dessert. The sauteed apples laid into the middle of the bread pudding make other bread puddings I eat now seem like they're missing something. And the homemade caramel sauce, with just a little brown sugar thrown into our clone version, adds a sticky bun flavor you'll have dreams about. No matter how big your dinner feast was, everyone will still somehow find room for this. The original at the restaurant is baked in a deep pan, and the pudding is sliced and served on its side, so you'll want to use the biggest loaf pan you can find. I used a 3-inch deep 10x5-inch loaf pan, and it was full. If your pan is smaller, you may have to leave a bit out. The pudding will swell up out of the pan as it cooks, but it will shrink back down as it cools. Fun to watch. You may want to make this the day before so that the bread pudding can set up in the fridge. When you are ready to serve, nuke a serving for 1 minute until warm, then add the sauce and ice cream and a handful of pecans. It appears the restaurant chain uses egg bread in the pudding, but Texas Toast thick-sliced white bread may be easier to find, and it works just as well. Click here for more of my Gordon Biersch copycat recipes.  Source: Top Secret Restaurant Recipes 3 by Todd Wilbur. 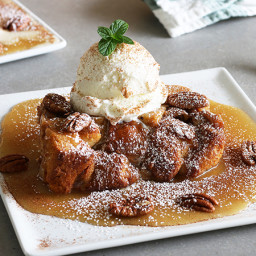