This has been a family favorite for four generations. Simple to make and so delicious, it's great to come home to a bowl full.

In the botton of a large heavy bottomed pot, fry the bacon until it's very crisp. Remove to some paper towel and drain of most of the bacon grease. Reserve the grease to add smal amounts back if needed during the next step.

Sprinkle the flour over the onions & potatoes and stir it in to get all the flour moistened with the bacon fat. Add a bit of additional fat if needed. Allow the flour to cook for a minute or so to cook off the flour taste but don't cook it until it starts to darken. Add the chicken stock and stir gently to mix. As the stock heats it will start to thicken from the flour and some of the potato. Add milk in 1/2 cup increments to keep the mixture soupy.

Adjust the seasoning to taste with salt, pepper, and hot sauce as desired. Add in the half & half to adjust to a thin, creamy consistency. Finally, add about 3/4 of the crisp bacon bits. Reserve the rest for garnish.

Simmer for another few minutes and serve. Top each serving with a few bits of bacon and slices of green onion.

You can add fresh or frozen corn, chopped green beans, or other appropriate vegetables. You can also change the chicken stock to clam broth and add minced clams to make this into New England style clam chowder.

This is one of our family's winter time staple comfort foods. 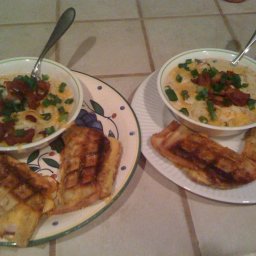 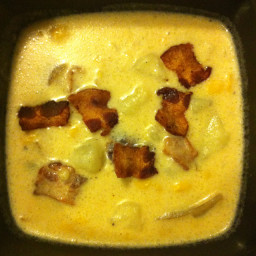 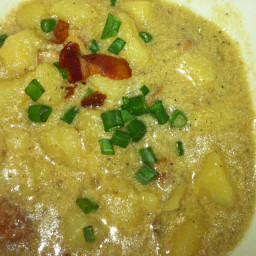 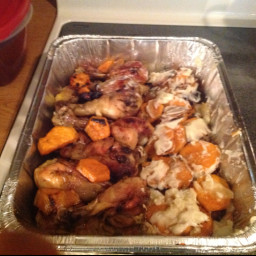 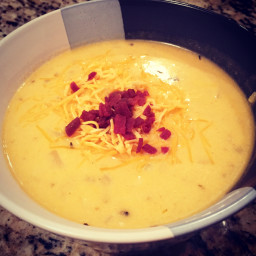 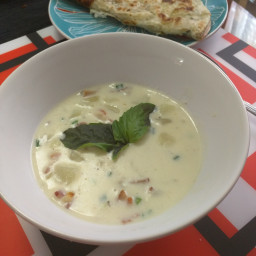 natiknc1
This was so good and easy to make. I added some green onions at the end for flavor and texture. My whole family and friends liked it. I am from Ukraine originally, so this was my first attempt at Potatoe Soup and am happy to find such easy directions to follow. Thank you author!
6y
Reply
Reply

Memaryme
My husband. Had seconds and I caught him licking his spoon and bowl... will do again.
7y
Reply
Reply

bonnie_hite
Wow! Best homemade potato soup I have made so far. The kids and the hubby thoroughly enjoyed it. I cooked the first batch of the potatoes a little too long, so when it says "starts to soften" that really means at the very beginning of the softening. I also used a little bit more than a dash of hot sauce and it really helped with the flavor. This will become a weekly addition in the cold winter months!
7y
Reply
Reply