Try this Greek Spaghetti Casserole recipe, or contribute your own.

Heat butter in pan, add meat and onions, cook quickly until meat is dark, golden brown. Break up the meat well with a spatula while cooking. Add tomato paste, water, mixed herbs, salt and pepper and stir until combined. Bring to boil, reduce heat and simmer covered for 45 minutes or until meat is very tender.

Cook spaghetti as per packet instructions. When cooked, place spaghetti in bowl, add extra butter and toss spaghetti until butter is melted. Place half the spaghetti in large well greased ovenproof dish and sprinkle half the parmesan cheese over spaghetti. Spoon meat mixture over top and cover with remaining spaghetti.

Bake in moderate oven for 40 minutes or until golden brown on top and heated through. 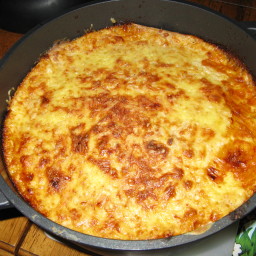