1. Combine the butter, pecans, and molasses in bowl of an electric mixer; blend using the paddle attachment until smooth.

2. Season with ¼ teaspoon of salt and a pinch of pepper.

3. Roll into a cylinder and refrigerate until needed.

(NOTE: CIA Chef said no need to roll into cylinder for this particular application, leaving me to apply a spoonful of softer blend to the top of each hot slice. The butter melted, leaving the pecans looking unattractively scattered on top of the slices.

1. Peel and cut into thin slices (½ to ? inches in thickness)

2. Put single latter of sliced sweet potatoes in pan, add small amount of water, add lid, and steam on high heat until about half-done. This can be done well in advance of final preparations.

3. Preheat gas grill to medium-high; leave one burner off as "safe" area for cooked slices. Clean the cooking grate.

(If using charcoal grill, build a fire and let it burn down until the coals are glowing red with a moderate coating of white ash. Spread the coals in an even bed on one side of the grill only.)

4. Brush the sweet potatoes with oil

5. Grill over direct heat, turning once, until marked on both sides, about 3 or 4 minutes per side, until tender throughout. With presentation side up, move to indirect heat.

6. Serve immediately on a heated platter or plates. Top with slices of pecan-molasses butter.

See notes below on ways to improve on this recipe.

My first attempt at making these (at Grilling Boot Camp) was not impressive. "The Flavor Bible" suggests some interesting flavor combinations more appealing to me than the ungarnished pecan-molasses butter topping called for. The photo is my actual product at Boot Camp. 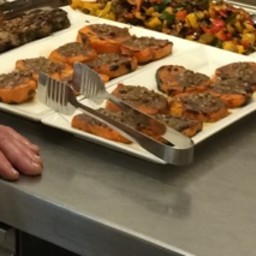