Take 1 small green bell pepper, 2 ribs of celery, and 1 small white onion (also known as the “holy trinity”) and dice them into medium-sized pieces. Set aside for later.

Mince 6 garlic cloves and set aside for later.

For the roux, add ½ cup of vegetable oil to a pot and allow it to get hot before adding ½ cup of all purpose flour. Using a wooden spoon or preferably a whisk, mix together until the consistency is similar to wet sand.

The darker the roux gets, the more you need to stir it, but let it sit for a few seconds before continuing to stir. After about 30-45 minutes, the color of the roux should be nice and dark or similar to the color of a Hershey’s chocolate bar. Set aside some of the roux to use later.

Add 4 bay leaves as well as your “holy trinity” to the pot. Make sure to set aside some of the holy trinity mix for later.

Once the mixture calms down a bit, add the minced garlic to the pot. Let the roux sit for 30 seconds.

Add 8 ounces of beer and stir it in and whisk to prevent the mixture from becoming clumpy. Then, add 4 cups of chicken stock SLOWLY and whisk using the same procedure as the beer.

Take 750g of vegan sausage and cut into coins.

Add 1 tbsp of cayenne pepper and a pinch of salt to the roux.

Turn the stovetop temperature to the lowest simmer possible and add a generous amount of black pepper to the roux. Then, add 1 tbsp of smoked paprika and stir.

Next, add the chopped up sausage to the pot.

Bring the roux to a bare simmer, cover it, and let sit for a couple of hours, 4-6.

Serve with cooked white rice, garnish with scallions, and enjoy! 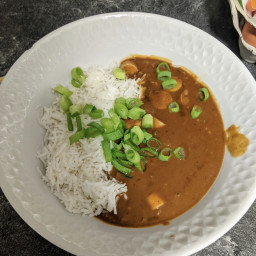